Focus on innovation, shift to Asia will encourage Canada’s competitiveness 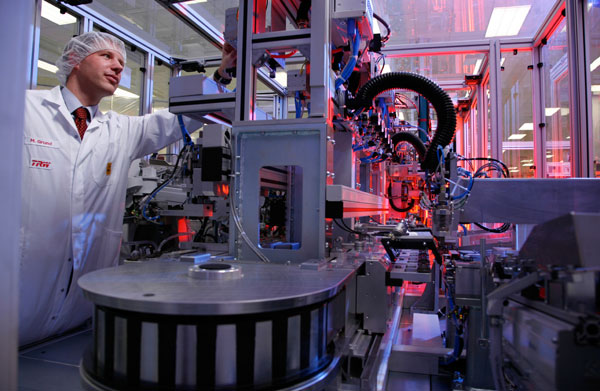 With Budget 2017, the government is attempting to cement Canada’s place in growing high-tech sectors and markets in Asia and Europe. PHOTO TRW Automotive

OTTAWA—Finance Minister Bill Morneau and the Trudeau Liberal’s second budget comes at a tense time for Canadian exporters. As U.S. President Trump threatens his trade partners with a border adjustment tax and pledges to reduce corporate taxes and loosen regulations, Canadian firms are asking: how do we stay competitive?

Many in the business community were hoping for an answer to Trump’s plans to cut taxes, but the Liberals stood pat on tax reform. Given how little we know about what is going to happen south of the border, that may have been prudent.

Jordan Brennan, an economist with Unifor, Canada’s largest private sector union, says that tax cuts may not even be a wise course to begin with.

“You can hear people in Canada saying we need to cut business taxes even further, we can’t layer on carbon taxes, we can’t pursue aggressive climate policies because we’re going to become uncompetitive. It’s a powerful argument, I just don’t know if it’s correct,” Brennan said.

He asserts that Canada has already cut corporate taxes substantially, and it hasn’t had the intended effect on our export trade.

“We’ve done all the things to incentivize business to invest and innovate, and meanwhile, our exports have tanked, our GPD growth has slowed, productivity is abysmal, and that probably signals that we need to rethink our approach to economic development,” he said.

The approach that Brennan proposes seems to be the same thing the Trudeau government had in mind when drafting this year’s budget: investment in innovation.

The rationale is simple. Instead of slashing taxes, regulations and labour laws to keep up with the U.S.—a “race to the bottom” as Brennan calls it—we should instead pump money into new discoveries in important sectors.

Not a lot of new money was earmarked for innovation initiatives in this year’s budget, but existing investment was dramatically reorganized.

What Budget 2017 has provided is a roadmap for innovation spending, as the government attempts to cement Canada’s place in growing high-tech sectors.

The amalgamation of these innovation funds could be a huge boon to what Brennan calls “trade exposed” sectors, like aerospace and automotive, which rely heavily on exports and could be badly hurt by protectionist policies in the U.S.

“It looks like it’s going to streamline the process for funding and grants, and hopefully simplify it, as well. We’ve been calling on the government to do this for some time, to streamline their operations so auto companies have a one stop shop, so to speak, when they think about making a strategic investment in a jurisdiction,” said Brennan.

This budget also shifts $950 million from the 2016 budget to six specific sectors of superclusters, which will be targeted as areas of investment and growth:
Advanced Manufacturing; Agri-food; Clean Technology; Digital Technology; Health, Bio-sciences and Clean Resources; and Infrastructure and Transportation.

He continued, “I think that is a real thing. Whatever we can do to incubate those companies and to develop leading players, we should.”

The economist cited examples like Silicon Valley and Hollywood as successful examples the Canadian government can look to.

While Brennan is happy with the innovation focus in the budget, he says that in the future specific funds need to be allocated to research and development, as well.

Brennan cites research from the International Monetary Fund, which argues that unless governments fund 50 per cent of research and develoment costs, firms won’t be motivated to undertake research because when one firm makes a breakthrough, often everyone in the industry benefits. The economics of discovery aren’t exactly attractive, thus research and commercialization should to be incentivized.

Plans to shore up the quality of our products by investing in new technology are encouraging, but we still need international markets to buy our goods.

The budget offers two paths for our exports, one to the east and one to the west. One path has Brennan and Unifor excited, the other not so much.

Budget 2017 announced that CETA will be coming this spring, but Brennan warns that this may not be a good thing for Canada’s advanced manufacturing sector—which recently overtook energy as Canada’s largest export sector.

“Our stance is that this is going to undermine jobs, just because of the nature of the purchasing preferences of the consumers from prospective markets. We don’t expect that Europeans are going to start buying the cars that we make here in Canada, even if we reduce tariffs,” said Brennan.

Canada’s auto trade balance with Europe is already lopsided, and given the popularity of European cars in Canada, and the lack of enthusiasm about North American cars in Europe, Brennan argues CETA will make things worse.

The economist is much more enthusiastic about the announced pivot to Asia, represented in the budget by a $256 million commitment over five years to join the Asian Infrastructure Investment Bank (AIIB).

Canada is the first North American country to apply for membership to the AIIB, which was accepted Mar. 24. Through the bank, Canada will invest in Asian infrastructure projects, particularly in transportation, telecommunications and energy.

The Trudeau government says it will introduce legislation on Canada’s membership to the bank in 2017.

The AIIB, established by China in 2015, has already invested US$1.73 billion in project money, and plans to loan out $10-15 billion over the next five years.

The bank has stirred controversy in the U.S., which opposes it on grounds that loans provided don’t require caveats about the environment, labour rights or anti-corruption reforms—stipulations usually included in World Bank and IMF loans.

But despite ethical questions, the AIIB presents lucrative procurement opportunities for Canadian firms.

The budget also planned for stronger trade relations with China, India and Japan, something that Brennan and Unifor are more enthusiastic about than CETA.

“Our government has always been worried about the undue reliance on the U.S. for our exports, but almost all of the global growth is coming from Asia now. They’re looking to establish economic relations with the high growth portion of the world,” Brennan said.

While Brennan asserts that we should still be very happy with our close trade relationship with the U.S., which remains the world’s largest economy, he says that diversifying our exports by investing in the fasting growing economic region on Earth is a sound decision.