Why have Canada and Australia taken such a different approach to China?

China has taken aim at middle powers like Australia and Canada to force their submission and set an example for others. 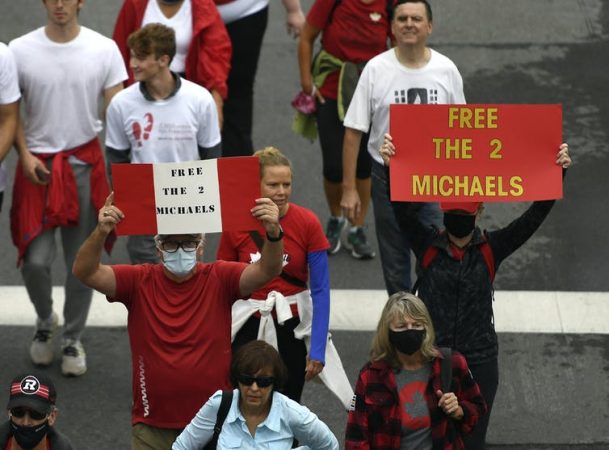 People hold signs in Ottawa calling for the release of Michael Kovrig and Michael Spavor during a recent March for the Michaels. THE CANADIAN PRESS/Justin Tang

Over the past two years, China has punished Canada and Australia for actions that the Chinese deem objectionable — and in response, both countries have faced unjust detentions of their citizens and sudden, harsh trade barriers.

Yet these two members of the Five Eyes intelligence alliance — which also includes the United Kingdom, the United States and New Zealand — have responded differently. That’s evident in the recent launch of the Australia/U.K./U.S. security pact called AUKUS, from which Canada is conspicuously absent.

The agreement includes provisions to start consultations to help Australia acquire a fleet of nuclear-propelled submarines.

Why was Canada not included, and why has Australia taken such a different path in response to similar situations? Are there areas where their approaches to China can converge?

China arrested citizens of both countries after Australia called for an investigation into the origins of COVID-19 and Canada arrested Huawei executive Meng Wanzhou over a U.S. extradition request related to fraud charges.

In the Australian capital of Canberra, the Chinese embassy issued a confrontational 14-point ultimatum demanding policy changes from Australia. It also sharply rebuked the country over comments on the Chinese judicial proceedings against Spavor and Robert Schellenberg, a Canadian citizen convicted of drug smuggling and facing a death sentence.

China has imposed a range of punitive tariffs on targeted Australian and Canadian sectors. In June of this year, China referred Australia to the World Trade Organization (WTO) over tariffs on steel products. Canada took China to the WTO on canola, and Beijing has since sought to block the investigation of Canada’s claims. These actions have implications for all middle power countries and their relationships with China.

It’s now a great power on the global stage, actively promoting its economic and political system as a legitimate alternative to a U.S.-led, rules-based international order. That includes the largest and most rapid expansion of maritime and aerospace power in generations.

Highly sensitive decisions are looming for Canada and Australia, including the judicial outcome on the Meng extradition case and the Australian Defence Department’s review of the Chinese company Landbridge’s 99-year lease of the strategic Darwin Port.

Hostile responses from China can be expected if decisions don’t favour Chinese interests. Indeed, China has taken aim at middle powers like Australia and Canada to force their submission and set an example for others — or “kill the chicken to scare the monkeys,” as the old Chinese idiom goes.

Beijing has conveyed to Canada that it is not a middle power, but a small power that has to stop leaning on the U.S.

The Chinese Communist Party perceives Australia and Canada as both “essential targets” due to their close alliance with the U.S. and “soft targets” because of their economic dependence on China.

Beijing therefore can unleash its wrath on Ottawa and Canberra without great risk to itself, setting an example for others not to cross it in any way. Even so, Canada and Australia provide China with various and much needed natural resources, so none of the parties involved want to risk losing those valuable economic ties.

Quiet diplomacy versus a firm stand

Managing middle power relationships with China is clearly difficult, and Canada and Australia have responded differently.

Canada has tried using quiet diplomacy, but for many months, Beijing did not even answer phone calls from Ottawa.

Canada hasn’t demonstrated to China that there are consequences for its actions against Canadian citizens and trade because it has a longstanding policy not to retaliate against an action in one area with sanctions in another. Canadian officials fear that reprisals could spiral out of control.

Furthermore, Canada has avoided taking actions that might anger China, and so still has not announced its decision on Huawei or on the listing of China’s CGTN television network, which has been broadcasting forced confessions by people detained in China on Canadian cable channels carrying the network.

Canada has also been circumspect in supporting its fellow democracy, Taiwan, which faces military intimidation from China.

Australia, on the other hand, has taken a firm stand in excluding Huawei from access to its 5G expansion program on national security grounds, introducing legislation requiring the registration of agents acting for “foreign principals” and updating its sanctions laws.

With the launch of the AUKUS security pact, Australia is working with two of Canada’s closest allies in response to growing concerns of an escalating threat and aimed at discouraging any future Chinese bid for regional dominance. At this stage, Canada is absent from the new agreement and the deal appears to have caught Ottawa by surprise.

This is despite the fact that Australia and Canada have similar perspectives in several areas. Both Australia Treasurer Josh Frydenberg and Dominic Barton, Canada’s ambassador to China, have argued that companies relying heavily on Chinese markets and supply chains should diversify to other markets.

The Australian prime minister has called for an annual economic dialogue between the trade and finance ministers of the U.S. and Australia, seeking protections against coercive economic and trade practices as part of maintaining regional security.

Canada would also benefit from such discussions with allies as a response to China’s overtly coercive trade punishments, just as the Canada-led Declaration on Arbitrary Detention responded to China’s hostage diplomacy.

Canada has been developing an Indo-Pacific strategy that’s expected to have both technology and security dimensions.

There have long been arguments that Canada should acquire modern submarine capacity to better defend its three coasts, including the Arctic, where China has signalled plans to build military infrastructure. Clearly, Canada would benefit by participating in this aspect of AUKUS.

But AUKUS is about much more than advanced submarines — it includes strategic intelligence-sharing, co-operation on cyber security, quantum computing, artificial intelligence (AI) and undersea technologies.

These are all Canadian technology strengths.

The government should use its new mandate to discuss with members of AUKUS how Canada can work with its allies on advanced technologies and, as a Pacific nation, how it can contribute to security in the Indo-Pacific region. That should include seriously considering joining the new security pact.