Because smoking is associated with a higher vulnerability to infectious diseases, the high rate of French daily smokers could also be a contributing factor. 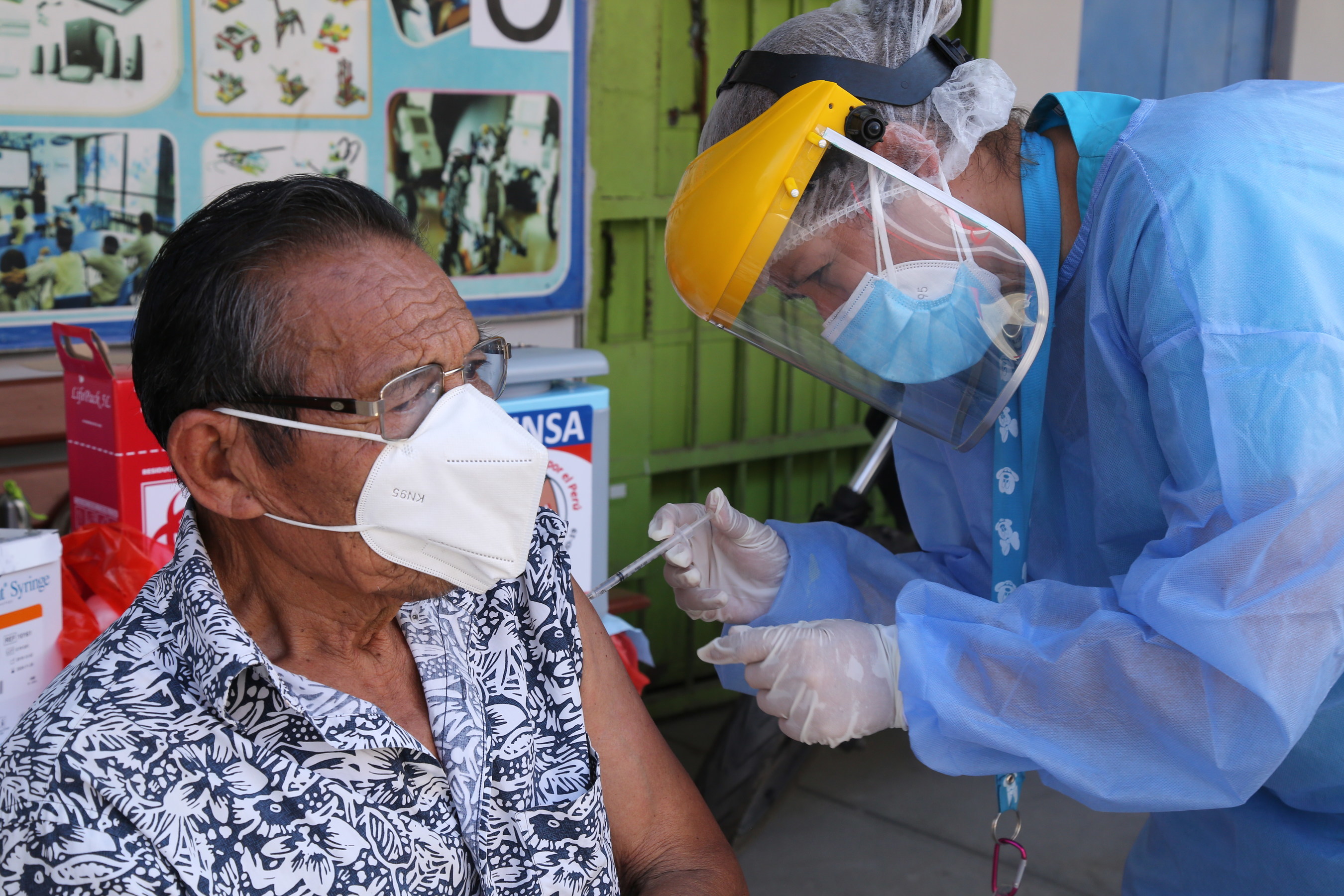 As of February 8, 2022, the cumulative number of Covid-19-related deaths globally is close to 5.8 million. With more than 2,300 Covid-19 deaths per million people, the United States, Belgium, Italy and UK have recorded the highest number of fatalities, followed by Spain and France (with about 2,000).

At that time, France’s per-million total of Covid-19 deaths was 14% higher than the average for high-income countries (1,740) – but this was not always the case. The difference peaked at 113% on May 1, 2020 and gradually narrowed thereafter (80% in June, 2020; 50% in December, 2020). Once the first wave of the epidemic had passed, that would seem to indicate that France managed the health crisis better than other high-income countries, but without making up for its initial shortcomings.

France’s performance therefore looks debatable given the quality of the French health care system and the relatively high share of GDP it dedicates to health care expenditure. In 2019, this amounted to 11.1%, a similar rate to Sweden, Canada or Japan, but behind the US, Switzerland and Germany with 16.8%, 11.7% and 11.3% respectively.

So what happened to a country which, according to the World Health Organisation in 2000, provided the “best overall health care” in the world? There are three possible explanations: the health of the general population, health care system performance and specific responses to tackle the pandemic.

A population more vulnerable to Covid-19?

Age and comorbidities are the main determinants of Covid-19-related deaths. Could residents of France be on average more likely to develop severe or lethal forms after infection with Covid-19 than people infected in other OECD countries?

First, France ranks 9th worldwide among countries with the largest proportion of +65 years old (20% of the population). Next, 38% of the French population aged 18 and over are living with at least one chronic condition versus 35.2% in OECD countries.

Because smoking is associated with a higher vulnerability to infectious diseases, the high rate of French daily smokers (24% versus 16% in OECD countries) could also be a contributing factor. Finally, at 65 years old, the French may expect to live one healthy life year (HLY) less than the Germans, and five HLY less than the Swedes (OECD).

Another explanation for the higher French mortality figures may come from the health care system itself. Dating to 1945, the French health care system is based on a so-called Bismarckian approach (an insurance model related to salary), combined with goals of universality similar to the Beveridge model of Britain’s NHS developed over the past 20 years. It is highly regulated in terms of the price, quantity and quality of care.

Statutory health insurance (SHI) is compulsory and uniform for all French residents. In 2000, SHI was extended to all legal residents through universal health insurance. Benefits covered under SHI and health care expenditure are defined at the national level. Moreover, complementary health insurance (CHI) supplements SHI for 96% of the French population. After all reimbursements, the average out-of-pocket payment in France is one of the lowest among OECD Countries (9% of current health care expenditure, behind South Africa with 7.7%). However, clear social disparities exist, especially in terms of access to specialists, medication, dental and optical care.

As far as primary care is concerned, the French healthcare delivery policy is not based on primary health care or public health. In this respect, the proportion of health expenditure devoted to ambulatory care is low compared to OECD countries (about 22% of health expenditure, and on average six physician visits, mainly to GPs). In addition, the number of doctors per head of the population is lower in France than the OECD average, with respectively 3.2 and 3.6 practising doctors per 1,000 people.

Since the mid-2000s, France has pursued a policy of reinforcing primary care. It implemented a patient enrolment system (the attending physician has acted as gatekeeper since 2004) and referral and diversified payment methods (physicians and specialists are mainly paid via a fee-for-service system). France has promoted and developed cooperation and multi-professional practice, in particular in health centres and clinics, and more recently, territorial coordination.

Finally, the French health care system is a centralised public-hospital care system built around the management of chronic diseases. Even if ambulatory care is increasing, hospital expenditure still accounts for almost half of all health care expenditure.

The initial health system response to the flood of positive Covid cases was therefore focused on the public hospital, leaving out private actors (such as clinics and self-employed physicians).

The number of hospital beds and flexibility of use are key factors in addressing any unexpected additional demand for intensive care. In 2019, the number of adult intensive care beds per 100,000 people in France was very slightly higher than the average for OECD countries (16.4 vs 14.1) but far behind Germany (28.2) or the USA (21.6). As a result, the French public hospital system became extremely congested.

The health crisis has laid bare weaknesses in the French health care system which have increased pressure on hospitals.

First, the French model is characterised by an underinvestment overall public health and long-term health strategy. In 2015, institutional spending on prevention represented 1.8% of current health spending, compared to 2.8% in OECD countries.

However, in 2007 France developed a very ambitious protection system against pandemics by building an agency called Eprus. Initially, substantial stocks of FFP2 and surgical masks, respirators and oxygen cylinders, equipment for analysis laboratory and accessories were available. For financial reasons and political choice, however, its budget was drastically reduced from 281 million euros in 2007 – before the H1N1 crisis – to 25.8 million euros in 2015, meaning that by early 2020 strategic stocks of masks and equipment were very low.

Then the pandemic exposed the limits of a centralised decision-maker and high level of bureaucracy in relationships between the Health Ministry, the regional health agencies and health professionals, which do not allow a fast and differentiated response according to different heterogeneous territories or populations needs. Measures adopted to limit epidemics may be more effective when defined at a smaller, more localised level, as in Germany (Länder).

Another reason stems from the lack of coordination between primary care and hospitals, public and private stakeholders and health care (handled at regional level) and nursing homes services (depending on a smaller administrative entity, the département). In 2020, care-home deaths amounted to 43% of all Covid-19 deaths, most of them occurring at the beginning of the crisis.

In addition, the low level of investment in innovation and medical research has hampered the French system’s ability to cope with the pandemic. For instance, in 2020 the share of adults treated by a doctor via a remote service since the start of the pandemic is the weakest in France among OECD Countries (23% vs 45%).

Finally, the failures of the Pasteur Institute and Sanofi to develop their own vaccine have made France totally dependent on the international market.

Rolling back the epidemic in a climate of suspicion

Starting on March 17, 2020, and continuing for eight weeks, France imposed a strict national lockdown similar to the one in Italy to counter the initial wave of the epidemic.

That year, the “test track isolate” strategy advocated by the government was only partially effective. First, even though screening tests were delivered free of charge (by October 15, 2021), there was a severe shortage due to difficulties in supplying machines and detection kits and to the rigidity of the French system.

Mass screening programmes were conducted in several countries due to the many asymptomatic forms of the virus. On May 31, 2020, when in France there were 10 cumulative Covid-19 tests per 1,000 people, there were already 25 in the UK, 51 in Germany and 58 in the United States.

There were also delays in implementing patient follow-up through tracking. Isolation, which is highly dependent on population density and the role of individual freedom in the existing political system, was not implemented either. These shortcomings in the identification, follow-up and referral of Covid-19 patients heavily affected the hospital system.

The lack of available masks and communication mistakes, combined with declining trust in governments and defiant behaviour that spread during the first weeks of the pandemic, especially when it came to complying with sanitary rules and, in the medium term, vaccination adherence.

To conclude, the quality of France’s healthcare system and the exceptional involvement, innovation and cooperation of health workers were able to offset a significant part of the high French death rate recorded at the beginning of the health crisis, which stemmed mainly from the country’s public health deficit and the centralisation and lack of flexibility of the French health system.