Levels of perfluorononanoic acid (PFNA) were twice as high among northerners than observed in the general Canadian population. 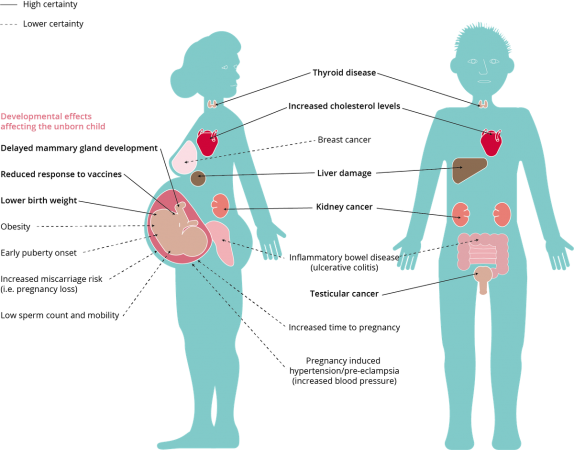 Researchers have recently found that several long-lasting human-made contaminants have been building up in Arctic lakes, polar bears and ringed seals and other wildlife.

These contaminants belong to a family of chemicals called polyfluoroalkyl and perfluoroalkyl substances (PFAS), and are used in food packaging, waterproof clothing and firefighting foams. The true number of PFAS that exist is hard to pin down, but estimates suggest there are more than 4,700 types, as industry continues to make new ones.

Researchers have been concerned about this class of chemicals because they do not degrade in the environment and may carry health risks for wildlife and humans. Our research team has measured these chemicals in the blood of people living in northern communities.

Northern exposure to PFAS
Although PFAS levels appear to be decreasing in southern Canada, probably due to their decrease in consumer products in the past 20 years, they have been on the rise in some parts of the Arctic.

From 2016 to 2019, our research group, led by environmental toxicologist Brian Laird, invited people living in the Yukon and Northwest Territories to participate in a study to measure PFAS levels, so that we could understand how people living in remote Indigenous communities were being exposed to these chemicals.

The results show that, generally speaking, men had higher concentrations of PFAS compared to women, and PFAS concentrations tended to increase with age. PFAS levels within the northern population were similar or lower to those of the general Canadian population living below the 60th parallel and other First Nations populations in Canada.

Health Risks of PFAS
Almost all of us have PFAS in our body even though some types of PFAS have been banned internationally since 2000. Exposure to PFAS usually comes from food, consumer products and contaminated water.

Populations with higher exposures to PFAS tend to have a greater incidence of high cholesterol, thyroid disruption, cancer, early menopause and other health effects.

However, the available science does not support any conclusion on expected health outcomes: we currently do not know if the level of PFNA observed in the current study is high enough to cause, or be associated, with any health effects.

It’s also a challenge to identify the sources of PFAS and PFNA, particularly for these northern communities. PFNA is used as a surfactant, by example on stain-resistant carpets or on non-stick coating of pots and pans, and may also be produced when other chemicals degrade. PFNA may also be transported over long distances like other PFAS.

There is little available data from Northern Canada to know if levels in humans have decreased or increased over time. However, since PFAS concentrations have increased in the Arctic environment, PFAS have also increased in wild food sources such as fish.

Finding PFAS in the blood of people living in these northern communities comes with an additional burden: many have a strong relationship with wild food and water, and environmental contamination can jeopardize the traditional lifestyles of northern and Indigenous communities.

Environmental policies
Since 1991, a group of international experts on contaminants in the Arctic have regularly released and updated the Arctic Monitoring and Assessment Program (AMAP) report to document chemical trends and their effects on ecosystems and people. Part of its goal is to inform policy and decision-making. The next update is due out this fall.

Canada and United States have regulations to prevent widespread contamination from these chemicals, including legislation that bans some products made with PFAS and lower PFAS limits in drinking water.

The finding that toxic chemicals are found in the blood of northerners at levels higher than people residing in the south shows that the Arctic and sub-Arctic regions are not exempt from industrial contamination. Additional monitoring and regulations should be put in place to decrease the exposure to persistent pollutants, to ensure the health of those who live there.