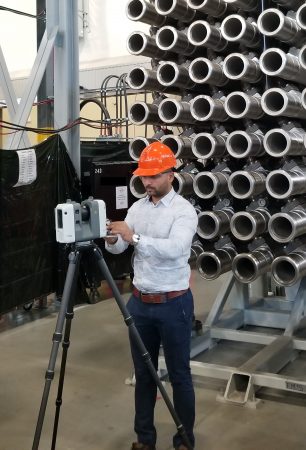 “What can we do to make tomorrow better?” That’s the question that drove Ontario Power Generation to implement a goal of achieving net-zero carbon emissions by 2040. With energy production and use widely acknowledged as the largest contributor worldwide to carbon and overall greenhouse gas emissions, clean energy initiatives within the energy sector are crucial to combat climate change.

Not as visible but no less important to helping OPG achieve its goals is an initiative to maximize digital data capture and management throughout the company’s plants and facilities. The company’s approach to digital remote management is contributing to success in clean energy transformation.

One of OPG’s most noteworthy current projects is the refurbishment of all four units at its 3.5-GW Darlington Nuclear Generating Station in Clarington, Ontario — a complex, multibillion-dollar, multiyear undertaking that includes removing, replacing and repairing core components as well as refurbishing the turbine generators.

A key strategy early on involved documenting the existing facilities and reactors. This included 3D laser scanning, which is the fastest, safest way to capture accurate, comprehensive as-built data in power generation and other industrial facilities.

Initially, OPG relied on outside service providers to handle the 3D scanning on an as-needed basis, focusing on specific projects and limited areas within a plant for design and engineering work. But management soon realized they were missing out on valuable assets with this approach. “We were paying for the 3D data collection, but there was no central infrastructure that could benefit our toolkit; no one knew where the scans were stored or how to access them,” explains Jaydev Chauhan, project engineer for the Refurbishment Innovations at Darlington Nuclear Generating Station.

Tasked with finding a way to centralize and manage the digitization of the company’s facilities, Jaydev says that OPG started looking closer at the technology and capabilities of the scanning service providers. One small project in particular had been used by OPG’s Engineering and Drawing Office teams to illustrate the potential of the technology to unfamiliar stakeholders:

“We had a project work order to replace the scaffolding in a nuclear power plant service water pumphouse with a permanent access platform,” he explains. “We hired a vendor to do 3D laser scanning, and meanwhile we designed the platform in 3D. We overlaid the 3D scan and model and showed others how it was going to work and where the interferences were, as well as the modifications we suggested for the design. Everybody saw it.”

“We held the constructability, operability, maintainability, and safety reviews that we do for nuclear plant modifications, and everybody voiced their concerns at that point because it was all visual, right there in front of them,” he adds. “And that streamlined the construction phase of it. There were no field-initiated changes. It was a smooth execution, with no issues or work stoppage during construction. That ignited our desire to have this technology within the organization.”

Jaydev undertook a leading role in the team developing a strategy for OPG’s digital transformation. To achieve their goals, the digital remote management technology would need to integrate smoothly with OPG’s existing governance and workflow, and be deployed easily on their server to provide easy access for all employees. It must support and be able to import all third-party laser scan data. Accuracy must be less than or equal to 1 mm. The data would need to be accessible by every employee with their existing username and password from local OPG servers. Capturing 5K imagery would allow for detailed visualizations, but they would need the architecture to handle the high-quality imagery in addition to the laser scan point clouds. “OPG used Leica Geosystem’s technology to meet these requirements,” Jaydev says.

OPG purchased a Leica RTC360 laser scanner along with JetStream, TruView Enterprise, Register360 and CloudWorx for Solidworks software in February 2019.

Moving forward, Jaydev worked with Martin Vanderheyden, manager of the Drawing Office section within Darlington Nuclear Generating Station’s Plant Design Engineering department, to assemble a 3D laser scanning team of comprising five team members. Within six months, they had completed more than 3,000 scans for countless projects, and more than 900 internal users were finding value in the published scan data and imagery in TruView. The company purchased two more scanners to meet the growing demand. Less than a year later, the number of users had increased to more than 1,600.

The Measurable and Immeasurable Benefits of Digital Remote Management

With the combination of the scanning and imaging technology in-house, and the greater ability to manage vendor-supplied scanning content, OPG is now able to systematically maintain accurate digital records that support its digital remote management strategy. Plant modifications are scanned and published as part of a standard operating procedure to ensure the digital records stay up to date, and the benefits of the digital data continue to grow.