The factory has more than 600 people designing, testing and building Red Bull Formula One cars 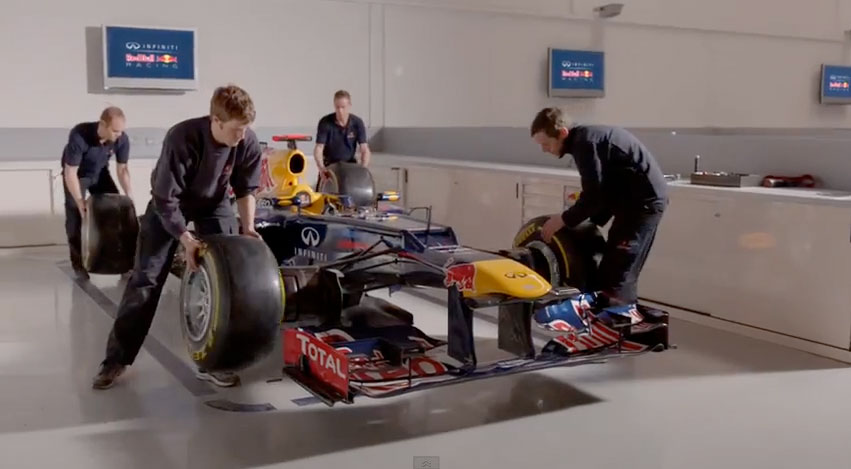 MILTON KEYNES, U.K.—It’s hard to imagine even a top-secret government institution having stricter security than the Infiniti Red Bull Racing factory in the south of England.

“Without the proper finger you can’t get in,” says our grinning guide Silvia Halfar, while prodding the fingerprint scanner as preceding a rare tour of the sprawling operation.

A click and the door springs open, allowing us access to some of the less sensitive areas of the complex. Inside, more than 600 people design, test, build and assemble the Formula One cars that have made Sebastian Vettel a four-time world champion driver and earned the team four Constructors’ Championships (though the team has been struggling this year).

Every season, the 110-member design team produces a new car that conforms to the strict F1 technical regulations. Compare that with anywhere from three to seven years to bring an Infiniti or any other car from design to your local dealership. Formula One team budgets are closely guarded secrets but some reports estimate Infiniti Red Bull spends in the range of $300 million a year.

F1 is at the leading edge of technology so it’s obvious why Infiniti is an enthusiastic partner. But it’s a two-way street. Race team management is quick to admit there is much it can learn from the Japanese car maker, especially as F1 now is using hybrid engines.

“Adrian draws up to 100 designs (car parts and components) a week, and I mean draws, literally,” reveals Halfar.

His work is scanned and 3D printers generate models for testing. A super computer tests every part “virtually” before a new model race car hits the former Concorde jet wind tunnel in nearby Bedford for “real” testing.

The computer’s processing power is a closely guarded secret but the team will admit it’s greater than 35,000 iPads combined.

It’s needed. Different internal and external parts are designed for every racetrack, sometimes late changes are made within 24 hours of a race.

“I had to take five bags to a race in Europe . . . some people have found themselves with a nose in the seat next to them!” laughed Halfar.

From a distance, visitors watch technicians in lab coats looking at their latest creation designed to improve the performance of the cars raced by Vettel and teammate Daniel Ricciardo.

Carbon fibre and lightweight metal alloys dominate the makeup of F1 cars but we don’t learn too much about them before we move on past the paint shop, which too must play its part in keeping the car’s weight to minimum. Paint formulas are secret so don’t expect Red Bull blue to be available at your local auto paint supplier.

“The cars are repainted with fluorescent paint for the night races,” Halfar points out, smiling. “Got to keep the sponsors happy and make sure their logos are clearly visible.”

The race simulator is out of bounds but we learn digital profiles of all new parts are fed into it and tested by the drivers in the virtual world, using the F1 circuits programmed into the machine.

It was likely overworked this year as the old V8 engines were replaced with turbo-powered 1.6-litre V6 hybrid power plants.

“We put it on a tea trolley, cover it with a towel and wheel it across the road!” Halfar chortles.

Our final stop was outside a room with a windowless wall. It’s the operations room, where live data is analyzed during races and information fed back to team engineers at the track. No admittance.

“After one race the winning team tweeted a picture of their ops room,” Halfar explained. “We could see who was in the room and what programs they were running on their monitors.”

With that, the exit door buzzed and the cool air rushed in at F1 speed.