The compensation order is one of the most important of the 20 decisions the human rights tribunal has issued during this lengthy litigation. 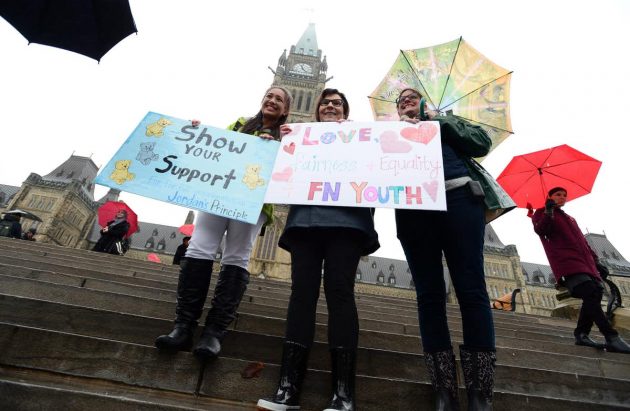 The discovery of more than 1,000 Indigenous children’s bodies in unmarked graves at the site of former Indian Residential Schools has shocked Canada’s national conscience. And the tragic news has left many asking what can be done to honour the memories of the children.

When widespread human rights abuses occur — like those experienced by Indigenous children in the Indian Residential School system — states must at a minimum guarantee they will not happen again.

In this regard, the decisions of the Canadian Human Rights Tribunal relating to a complaint lodged by the Assembly of First Nations and the First Nations Child and Family Caring Society provide a roadmap for Canada to put an end to the ongoing cycle of discrimination that continues to harm First Nations children today.

Canadians who wish to pay tribute to the children who died at Indian Residential Schools should demand the government stop fighting First Nations children in court and fully comply with the huan rights tribunal decisions aimed at not repeating the harms of the past.

In 2016, the human rights tribunal found that Canada was racially discriminating against 165,000 First Nations children by providing them with inequitable services.

Failing to act on this decision, 19 other non-compliance orders by the tribunal and the Truth and Reconciliation Commission’s Calls to Action pertaining to child welfare services, Canada’s discriminatory conduct towards First Nations children is ongoing.

Meanwhile, the government of Canada’s discrimination incentivizes the removal of First Nations children from their families, homes and communities rather than providing support for preventive, early intervention and minimally intrusive measures.

There are more Indigenous children in state care today than there were at any time during the residential school era. According to Marie Wilson, one of the three TRC commissioners, the harms experienced by children today when removed from their families, homes and communities are comparable to the experiences of those who attended residential schools.

In 2017, Wapekeka First Nation wrote to Health Canada seeking funds to provide mental health services when it learned about a suicide pact amongst children in the community. Health Canada ignored the request saying that it “came at an awkward time in the funding cycle.”

That year, three 12-year-old girls from the community died by suicide. And according to the family physician for Wapekeka First Nation, these deaths could have been prevented had the girls received the mental health services they needed.

Since issuing its 2016 decision, the human rights tribunal has closely monitored Canada’s response to the various findings of discrimination against against First Nations children.

When Canada has shown itself to be either unable or unwilling to comply with the orders, the tribunal issued non-compliance orders that detail the precise measures the government must take to reduce the harmful impacts of discrimination against First Nations children and their families.

Canada has contested most of these orders before the tribunal and is now seeking to quash two of them before the Federal Court of Canada.

The federal government has spent millions of taxpayer dollars fighting First Nations children, some of whom are the children and grandchildren of residential school survivors.

Why is it important for Canada to compensate?

One of the decisions Canada is currently challenging before the Federal Court requires Canada to compensate some of the First Nations children and their parents who were harmed by Canada’s discrimination – including those who were unnecessarily removed from their families and homes.

The compensation order is one of the most important of the 20 decisions the human rights tribunal has issued during this lengthy litigation. Why?

Though the tribunal properly noted no amount of money can ever recover what the victims have lost, the compensation aims to symbolically acknowledge the infringement of dignity that has occurred as a result. This is also an essential first step to restoring trust in the federal government — a vital element to reconciliation.

A report by the United Nations Special Rapporteur on the promotion of truth, justice, reparation and guarantees of non-reocurrence, emphasized that compensating victims of human rights violations helps perpetrators understand what they did was wrong. It also encourages Canada to cease its discriminatory behaviour.

The litigation process revealed that Canada knew that it was under funding services for First Nations children and was aware of its harmful impacts. Despite this, it intentionally chose to continue its behaviour because it considered ceasing to do so was too expensive.

And even after Canada was found to be in breach of the Canadian Human Rights Act, internal documents reveal that it deliberately chose to disregard the human rights tribunal’s legally binding orders because the cost of complying would have “far reaching resource implications.”

Simply put, Canada thinks respecting the human rights of First Nations children is not worth the money.

What can be done today to honour the memories of those who died?

The survivors of IRS shared their stories to the TRC in hopes that their children and grandchildren would not experience the harms they did.

Canadians who wish to stand in solidarity with Indigenous communities that are mourning the loss of their children must demand the government not repeat the mistakes of the past.

This starts with urging the federal government to fully comply with all of the legally binding orders of the Canadian Human Rights Tribunal and demand the government stop fighting First Nations children in court.