Corporate social responsibility, or CSR, is a burgeoning business model 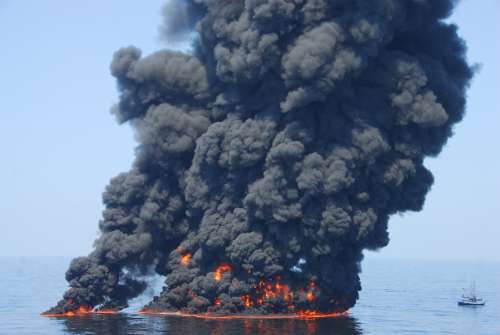 On April 20, 2010, the oil drilling rig Deepwater Horizon, operating in the BP-operated Macondo Prospect in the Gulf of Mexico, exploded and sank, resulting in the death of 11 workers on the Deepwater Horizon and the largest marine oil spill to date. In 2012, BP settled federal criminal charges with the Department of Justice and pled guilty to 11 counts of manslaughter, two misdemeanors, and a felony count of lying to Congress. PHOTO: USEPA Environmental-Protection-Agency via Wikimedia Commons

In April 2013 in Bangladesh, the Savar building collapsed, killing an estimated 1,300 garment workers and injuring another 2,500 in what became known as the Rana Plaza collapse.

The story intrigued me as an academic and global citizen wanting to find answers.

There is a long history of industrial accidents in Bangladesh factories, and there continue to be issues in the aftermath of these accidents.

This is despite decades of activism, including universities such as my own vowing to take responsibility for their supply chains. After Rana Plaza, North American and European clothing retailers, from Benetton to Joe Fresh, all claimed that this time was different.

They created two ambitious systems of auditing and supply-chain tracing, along with worker complaint lines, to reassure customers that their clothes were made safely and that major companies were taking responsibility.

In the aftermath of the accident, I worked with Maureen Benson-Rea, a business professor at the University of Auckland, to examine this supposedly game-changing set of agreements. The results, which came out in a collected volume, were not promising.

Among other things, we found an almost total lack of local labour enforcement by the Bangladeshi government, and an almost complete lack of follow-through on failed audits of multinational corporations (in this case, clothing brands), including remedial actions. Seven years later, nothing has really changed for Bangladeshi workers.

Corporate social responsibility, or CSR, is a burgeoning business model. Spurred by a series of scandals, it has become a mainstay of our business schools.

However, CSR efforts haven’t stopped the continual parade of scandals, from Boeing’s 737 Max failures to the BP Deepwater Horizon oil spill and the well-known gaming of financial markets by investment houses, as depicted in books and films that include The Wolf of Wall Street and The Big Short.

Instead of progress towards decency in labour and environmental standards, we find ourselves in a continuing maelstrom of corporate social irresponsibility.

When matched with growing inequality, it’s no wonder we’re in a new age of populism and protest, with a reflexive reaction against big corporations. Far from being responsible citizens, large corporations are increasingly dodging paying even basic taxes.

There are three obvious sources of failure in CSR.

The first is the general move towards neoliberalism, or the faith in markets to create self-regulation by allowing companies and investment houses to make their own bets and supposedly suffer the consequences. Anyone with common sense knows that companies are wired towards profit and, in the absence of public policy, will put it above all else.

We shouldn’t forget that western labour and environmental standards were the result of government policy, not markets. In fact, the minute markets fail, companies consistently cry for government bailouts, as we saw in the 1980s-‘90s savings-and-loan crisis in the U.S., the 2008 financial crisis and the ongoing COVID-19 pandemic — all while financial services lobbyists block reforms to prevent future crises.

This has been enabled more generally because companies have been able to influence regulation, undoing any real reform efforts, and in many cases push false counter-narratives, such as climate change denial. In the Global South, where governments lack rule of law and institutional capacity, companies have a long history of feeding corruption and influencing governments to cut “sweetheart deals” to benefit them financially. CSR is important for marketing, not for the bottom line.

The second source of failure is related to the globalization of production. Governments in the Global South have consistently voiced their opposition to rigorous labour or environmental standards on the grounds that companies will simply move their factories elsewhere.

The fight for jobs, consistent investment and the desperate need for access to multinational corporation’s retail outlets explains why coffee farmers, for example, take pennies on the dollar compared to large coffee retail chains like Starbucks.

Simply put, governments and workers in the Global South have limited bargaining leverage when it comes to large transnationals, and workers and local communities have even less. Clearly, a global system is needed to better balance the scales.

CSR advocates would point to the plethora of global initiatives, from the Global Reporting Indicators to the Extractive Industries Transparency Initiative, coming in the wake of The Global Compact, an agreement championed by the United Nations. These initiatives were ostensibly aimed at setting guidelines and demonstrating responsible behaviour.

Companies are spending an estimated US$20 billion per year on CSR to comply with these standards, and pay an army of consultants and NGO auditors to verify such. As I argue in a recent article in Global Affairs and in a special edition of the Journal of Developing Societies, such efforts are vacuous and more effective at public relations than at changing real-life outcomes.

Third source of failure: No transparency

In fact, there is a continuing lack of transparency in CSR initiatives — most of them largely dependent on businesses self-reporting their efforts — that socially responsible investment indices rely upon. Audits are specious and full of conflicts of interest because companies actually employ auditors to verify their compliance. Most of the investment indicators do not even dispatch personnel to sites to verify what companies are claiming.

Governments that receive millions in royalties from multinational corporations for the right to mine, for instance, do not report what they do with the revenues, and so corruption is apparent. In short, there is no real accountability or enforcement of CSR standards.

The bottom line is that companies are in no way taking responsibility for changing anything concretely. Their CSR reports delve into taxes paid, one-off projects and related expenditures, not on changes in real-life outcomes.

In assessing mining sites over the past four years, I have seen communities without basic services — no running water, electricity or roads — located next to international mines that have been rewarded or lauded for their CSR initiatives.

It’s no surprise therefore that global mining continues to be plagued by continual conflict. Until there are global standards for outcomes, transparency through the supply and revenue chains, conflict-free auditing, enforced labour rights and environmental standards, we will continue to see local impoverishment, hazardous waste and tragic labour accidents as resources in the Global South are exploited by companies in the West.

A handful of well-meaning activists can’t make any real difference in this fight.

Consumers can make their voices heard by pushing politicians to leverage access to western markets to set up a global system that matters, with standards that can be verified.

Just as we don’t allow our companies to sell products that use child labour, pollute the environment or bypass communities where resources are exploited in our own countries, we can simply apply the same principles for products made anywhere.

Extending this basic principle — already the standard for domestic products — would immediately force companies and host governments to change their practices, creating a level playing field for organizations that want to do the right thing, which would then become routine.

Such a policy shift would change the world overnight, raising the living standards for millions and saving capitalism from itself.