As pandemic restrictions ease, we need to consider ethical travel in our return

The pandemic provides the needed landscape for individuals, governments and institutions to rethink what travel looks like. 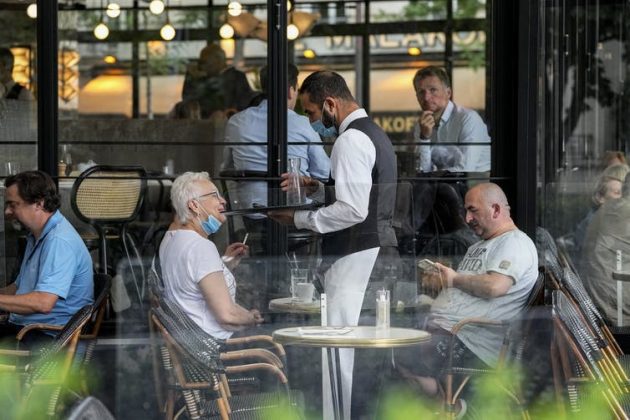 A waiter wears a face mask as he serves customers at a restaurant terrace in Paris. France’s parliament recently approved a law requiring special virus passes for all restaurants and domestic travel, and mandating vaccinations for all health workers. (AP Photo/Michel Euler)

Return to movement is a central feature of how the Canadian government has been discussing the return to normal.

Throughout much of the pandemic governments — including Canada’s — “fought” the pandemic through limiting travel.

As vaccinations rise, so does the desire to return to travel. Canada’s federal government has missed an important moment to start a conversation on ethical travel, especially with increasingly worrying climate data.

The danger of human-caused climate disruption remains one of the most crucial themes of international public policy. Human-caused climate change is linked with a history of industrialization, deforestation and large scale agriculture, contributing to the rise in greenhouse gases.

Of course, it is nearly impossible to understand the speed with which these events will increase, but an unimpeded travel boom as lockdown restrictions lift seems counter-productive to human-caused climate disruption.

Consider the aviation industry that produces between five and eight per cent of global emissions and impacts the climate most significantly. Despite these facts, public debate on connections with human-caused climate change and air travel remains scant.

We sit at a crucial moment not only for how we impact climate change, but also fundamentally rethinking travel, because it hasn’t been a major part of our lives for the last 18 months.

Mobility as a guiding principle

Mobility has always been a central feature of the pandemic.

Early on, many Canadians eagerly waited for the next announcement from Prime Minister Justin Trudeau and Dr. Theresa Tam, Canada’s chief public health officer, on what could and couldn’t be done because of COVID-19.

As borders closed and Canadians were asked to stay home, Immigration, Refugees and Citizenship Canada was drafting a directive that would allow travel exceptions for seasonal agricultural workers, primarily in the name of Canadian food security. International students and permanent residents were also able to arrive.

COVID-19 highlights how important it is for us to move. In the last several months, individual governments and the European Union have put forth tentative plans for vaccine passports.

While vaccine passports will be under scrutiny, the primary reason for building a system is a return to mobility. On July 1, the EU formally introduced a vaccine passport that allows its citizens to travel freely across the EU.

Mobility and the economy

It is still hard to predict what future travel patterns will be, although predictions continue to rise. We move not only because it is a feature of the human experience, but also because it sustains the global economic system — we need to move to sustain the economy.

Although some have called for a fundamental rethinking of the global economy, it seems more plausible and attainable to reconsider future travel behaviours, rather than completely dismantling the economy. Economic growth and environmental issues are at odds.

Ethical citizenship and ethical travel are vast ideas. In the course of my research, I came across Beau Miles, a YouTuber and academic with a PhD in outdoor education. An overarching theme of Miles’s work was that he used to travel to “find himself.” That raises an interesting proposition of the larger ethical relationship with travel.

The question of what ethical travel is in the name of preventing climate catastrophe is important. It can lead to individual contributions that reduce a personal carbon footprint, such as domestic travel and avoiding extensive air travel which help prevent climate catastrophe.

The pandemic provides the needed landscape for individuals, governments and institutions to rethink what travel looks like. The desire for ethical travel requires shifting perspective and relocating where adventure can be found.

Miles is a great example of finding adventure locally. Whether this be kayaking to work, running a marathon over a 24-hour period or following a decommissioned railway line through the Australian countryside, he finds adventure is about shifting perspective. The challenges Miles takes on, the ethics of finding pleasure in local events, is a great starting point for all of us.

Think before we move

The pandemic provides a crucial moment in history for considering why we move.

In both my professional and social circles, we all seem to be discussing what conferences we will attend and where we will travel. We are all eager to “return to normal,” but what will that look like? Some upcoming conferences have both in-person and online options for attendance.

We should consider the relationship between technology, surveillance and mobility — and how mobility, which really boils down to driving a car or taking a plane, has been central to what it means to return to normal.

While we begin to move again, what is largely missing from this conversation is rethinking consumption behaviours, which includes where, when, how and why we travel.

What it means to be an ethical traveller is still unresolved. What is clear, however, is that travel patterns, often for those in the Global North, have a clear impact on human-caused climate change.

Recently, my research has looked at understanding the relationship between citizenship, mobility and vaccine passports. Almost as quickly as science was able to produce an effective vaccine, governments and international organizations have rushed to produce electronic vaccine passports in an attempt to reach pre-pandemic travel patterns.

Consumption behaviours should be central to how the Canadian government links how it thinks about travel and the environment. After all, it will be the policy that is needed to shift consumption patterns.