Polar lows are particularly challenging to forecast due to their small size and short lifetime, and many questions remain unanswered 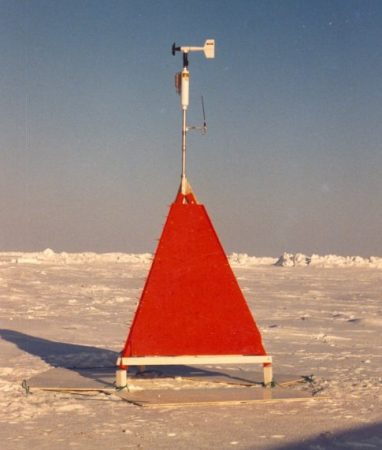 This is Coastal Environmental’s first Arctic weather station (circa 1981) built for NOAA scientist to measure and report surface weather and sea temperature. Since it is on ice it is often referred to as a “buoy” even though it does not float PHOTO: Wikimedia Commons

Norway’s coastal communities are familiar with polar lows, but they often go unnoticed in Canada. Short-lived, but intense and hard to forecast, polar lows can cause considerable damage with gale-force winds and heavy snowfall.

On Feb. 28, the Norwegian Meteorological Institute warned populations along the coast of Finnmark of an incoming polar low. One week later, another polar low threatened Norwegians, this time near Trondheim.

Polar lows often occur in sparsely populated regions, but they have led to deaths. Therefore, we must improve our ability to forecast these abrupt and intense storms.

My research in atmospheric sciences focuses on these meteorological phenomena. I conduct simulations of polar lows with the Canadian Regional Climate Model in the Centre for the Study and Simulation of Regional-Scale Climate (ESCER).

Polar lows are particularly challenging to forecast due to their small size and short lifetime, and many questions remain unanswered. But after an exhaustive review of the published scientific literature, I’m able to answer many of the questions people have about polar lows.

Polar lows are intense maritime storms that develop near the poles during the cold season. With a diametre of less than 1,000 kilometres and typically lasting less than 48 hours, polar lows are smaller — and have a shorter lifetime — than the winter storms that often affect Eastern Canada.

Consequently, polar lows pose a threat to coastal communities, maritime and air transport, and oil and gas platforms. Some polar lows have caused the loss of human lives. For instance, in October 2001, the Torsvåg polar low developed near a fishing village on Vannøya island, in northern Norway. A boat capsized in the strong winds, killing a crew member.

Closer than we think

Polar lows develop in the northern and southern hemispheres, between the poles and a latitude of around 40 degrees north and 50 degrees south, respectively. They form near the sea-ice edge (where the sea ice meets the open ocean) or snow-covered continents, when very cold air flows out over the relatively warm ocean.

The heat and humidity the ocean provides energy to the cold air to feed the development of polar lows. Polar lows dissipate when they make landfall or move over the sea ice and the energy source disappears.

Near Canada, we observe polar lows over the Labrador Sea, Davis Strait and Hudson Bay. These regions have low population density, so the risk of a polar low affecting a community is small.

In other parts of the world polar lows can be dangerous. Norway and Japan suffer from the impacts of these storms since they have important population centres located in the coastal regions where polar lows can develop. The weather associated with polar lows can lead to road and airport closures, and there is also a risk of snows avalanches. For instance, in January 2019, a particularly intense polar low made landfall in Norway, causing road closures and the isolation of a village.

Storms that are hard to predict

Accurate forecasts of polar lows are essential to avoid any damage from them. But forecasting polar lows is challenging due to their small size and short lifetime.

As with other weather forecasts, the essential ingredients for a correct polar low forecast are an atmospheric model that performs well and good knowledge of the current state of the atmosphere. Yet a lack of conventional observations (such as observations from surface stations) over the ocean and near the poles means that the initial conditions are still not good enough.

The recent development of atmospheric models — a set of equations that describe the evolving state of the atmosphere — that have high resolution allows polar lows to be forecast better than before. Scientists continue to work on these models to improve the ways they represent heat exchange between the ocean and atmosphere, and other important processes.

Despite the fact that the high-resolution models allow us to correctly forecast some polar lows, there is still much work to do in order to succeed at correctly forecasting all these meteorological systems. In the meantime, be on the lookout: the polar low season in the northern hemisphere is not over yet!