"Little tweaks, or a do-nothing approach, won't cut it." The two unions say autoworkers in the U.S., Canada and Mexico all deserve their fair share 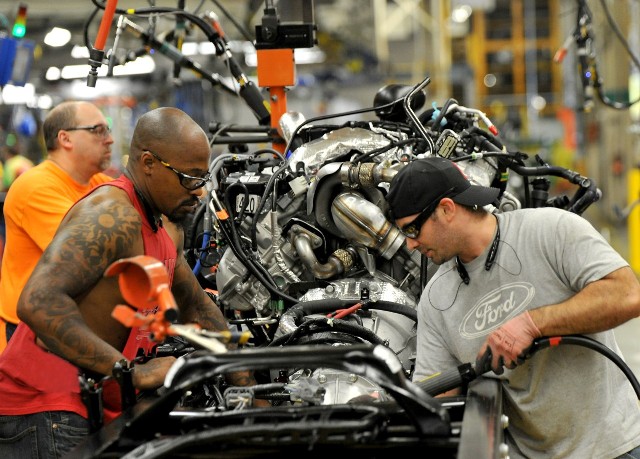 The unions say NAFTA has cost hundreds of thousands of jobs in the U.S. and Canada, including many in the auto industry. PHOTO: Sam VarnHagen/Ford

The U.S. and Canadian unions that represent hundreds of thousands of auto workers across North America issued a joint statement July 11, laying out several of their key priorities for when the U.S., Canada and Mexico finally sit down to renegotiate the two-decade-old trade deal.

“The time has come to make major changes to NAFTA. Little tweaks, or a do-nothing approach, won’t cut it,” UAW President, Dennis Williams, said in a statement.

For the unions, trade talks should centre on helping workers in all three regions while ensuring vehicles and parts continue to transit the U.S., Mexican and Canadian borders tariff-free.

Unsurprisingly, workers in Mexico are the worst off, with the average autoworker making approximately US$3.95 an hour—a factor that has led to major production shifts out of Canada and U.S. over the past 23 years as companies relocate to lower their costs.

Since NAFTA came into force, the U.S. trade deficit in autos and parts with Mexico has grown from $3.6 billion to $65.3 billion. Canada’s automotive deficit with Mexico, meanwhile, expanded fourfold, growing to $7.1 billion from $1.6 billion in 1993.

To counter the trend, the two unions say there is an urgent need to raise wages and labour standards in Mexico.

“Mexico’s general failures to enforce labour and other laws have left workers without real recourse regarding violations of freedom of association, working conditions, or other problems,” the statement says. “Despite this realization, NAFTA does not provide any adequate way to address these abuses, in turn encouraging them.”

The two unions say any renegotiation should include provisions to address these labour issues.

And while the UAW and Unifor continue to support free movement of vehicles and parts between the U.S., Canada and Mexico, they say NAFTA negotiators should structure the agreement to achieve a greater trade balance between the three countries. They also argue the trade agreement needs “real” made in North America rules.

NAFTA negotiations are expected to get underway shortly, though the scope of the talks and the timeline for concluding negotiations has been a moving target.

You can read the full joint statement here.