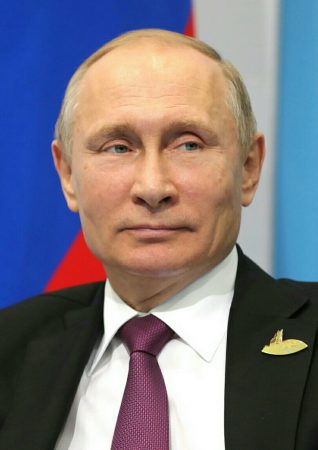 MOSCOW – Russian President Vladimir Putin issued a chilling warning Thursday about the rising threat of a nuclear war, saying ‘it could lead to the destruction of civilization as a whole and maybe even our planet” – and putting the blame squarely on the U.S.

Speaking at his annual news conference, Putin scoffed at Western claims he wants to dominate the world and said Western countries are antagonizing Russia for their own domestic reasons, and at their own peril. He dismissed claims of Russian interference abroad, from a nerve agent poisoning in Britain to an alleged effort to infiltrate the U.S. National Rifle Association.

Instead he sought to paint himself as the world’s protector. Pointing at the U.S. intention to withdraw from the 1987 Intermediate-Range Nuclear Forces, or INF, Treaty, Putin warned that if the U.S. puts intermediate-range missiles in Europe, Russia will be forced to take countermeasures.

“We are witnessing the breakup of the arms control system,” Putin said, noting the U.S. plan to opt out of the INF Treaty and its reluctance to negotiate the extension of the New START agreement. U.S. officials say the withdrawal from the INF was prompted by Russian violations of the treaty.

Putin noted that Western analysts are talking about the possibility of using low-yield nuclear weapons.

Putin also emphasized that the U.S. is pondering the use of ballistic missiles with conventional warheads, saying that the launch of such a missile could be mistaken for the launch of a nuclear-tipped one and trigger a global catastrophe.

“If that happens, it could lead to the destruction of civilization as a whole and maybe even our planet,” he said.

Putin also noted that the U.S. appears to show little interest in extending the New START nuclear arms reduction treaty, which expires in 2021.

“You aren’t interested, you don’t need it? OK, we know how to ensure our security,” he said.

Putin said it’s the U.S., not Russia, that’s aspiring to dominate the world. He pointed at U.S. annual defence spending exceeding $700 billion, comparing it with Russia’s military budget of $46 billion.

He had one nice thing to say about the United States, however: He welcomed President Donald Trump’s decision to withdraw the U.S. military from Syria.

The U.S. “has done the right thing,” Putin said, reaffirming the long-held Russian argument that the U.S. presence in Syria was illegitimate because it wasn’t vetted by the U.N. Security Council or approved by Syrian President Bashar Assad’s government. The pullout is also likely to strengthen Russia’s role in Syria’s future.

Putin said accusations of Russian interference in the West were trumped-up.

He insisted that a Russian woman in U.S. custody has not carried out any mission for the Russian government, even though she has pleaded guilty to acting as a covert agent of the government. Putin claimed that Maria Butina – accused of trying to infiltrate the NRA and American conservative circles around the time of Trump’s election – made the guilty plea because of the threat of a long prison sentence in the case, which Putin described as fabricated.

He described British accusations of Russian involvement in the poisoning of a former spy in Salisbury as part of Western efforts to isolate and weaken Russia. However, he voiced readiness to normalize ties after the poisoning of Sergei Skripal and his daughter in March.

Putin showed no sign of backing down from Russia’s stance on Ukraine. He accused his Ukrainian counterpart of provoking a naval standoff with Russia to boost his electoral prospects. The Russian coast guard fired upon and seized three Ukrainian naval vessels and 24 seamen when they tried to sail from the Black Sea into the Sea of Azov in what U.S. and its NATO allies condemned as unjustified use of force by Russia.

On the economy, Putin hailed another year of Russian growth after a previous period of stagnation.

Russia’s gross domestic product is set to grow by 1.8 per cent this year, while industrial output has grown faster at 3 per cent, he said.

The Russian president noted that the nation’s hard currency reserves have increased from $432 billion at the start of the year to $464 billion now.

The positive statistics follow a difficult period in recent years when Russia’s economy has suffered a combined blow of low oil prices and Western sanctions.

Putin pledged that the government will create incentives to speed up growth.