NAFTA: Tug of war unfolding over concluding a quick deal

All three NAFTA countries insist they're prepared to keep talking, but it's unclear for how long 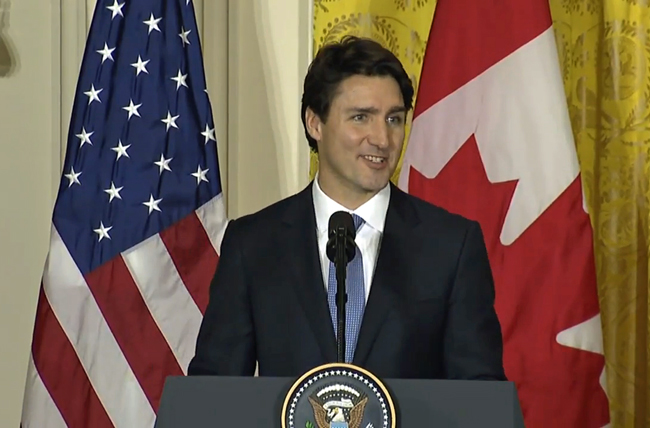 Trudeau’s hope of a quick resolution to NAFTA, to restore business confidence and certainty in Canada, will likely go unfullfilled.

WASHINGTON—A quiet power struggle over NAFTA has finally broken into public view, a tug-of-war within Washington between a faction seeking a quick conclusion and another urging lengthier negotiations, possibly spilling into next year.

The tension between those conflicting aims has existed as a quiet dynamic of the recent NAFTA conversations before this week, when it erupted into the open.

The Canadian government made clear which side it’s pulling for.

It made a public show of throwing its energy in with those seeking a speedy conclusion, in multiple meetings in Washington and New York, in public comments from Prime Minister Justin Trudeau and in two private conversations with President Donald Trump.

It has allies within the administration as evidenced by public comments this week by White House economic adviser Larry Kudlow and Agriculture Secretary Sonny Perdue, who both expressed hope for a conclusion.

Trump son-in-law Jared Kushner has remained publicly mum but has also made numerous trips across the street from the White House to assist negotiations at the U.S. trade headquarters.

But one powerful opponent of a speedy deal also made himself heard this week.

U.S. trade czar Robert Lighthizer, who has been reluctant to schedule rounds and is viewed as a quick-deal skeptic, stood his ground in that tug of war: “(We) are nowhere near close to a deal,” Lighthizer said in a rare public statement.

“There are gaping differences.”

The struggle isn’t over. Conversations about wrapping things up are still happening on multiple fronts, according to people close to the talks. It also came up when Trump called the prime minister late Thursday, in what was described as a friendly phone call.

The reason the Canadians want a quick deal, as do some allies in the U.S., boils down to a desire for certainty. Trade instability has hit business investment in Canada, reducing it by a projected two per cent this year, and in the U.S. it has added to the compendium of woes clobbering farm states.

Trudeau this week publicly signalled the Canadian view that a deal is being held up for unorthodox reasons.

He suggested the main impediment to an agreement has little to do with any one industry and lots to do with Lighthizer’s insistence on weakening the agreement via a five-year sunset clause and stripping down dispute-resolution systems.

Trudeau specifically mentioned the sunset in a New York appearance, even mocking it with a real-estate metaphor designed to appeal to the president: Why would anyone construct a building, he asked, if the deal for the land could end in five years?

Several insiders saw that statement as Lighthizer pushing back.

Trade lawyer and U.S. political insider Dan Ujczo said he believes it pits the trade czar against others—Perdue, Kushner, and Treasury Secretary Steve Mnuchin—and he suggests even the president is sympathetic to the idea of notching a quick win.

He read Lighthizer’s statement as sending a message that a deal now would fail to address numerous concerns, alienate those industries and constituencies left out, and cause a backlash against Republicans in a midterm election year.

Lighthizer spent years as a congressional staffer and knows the institution. Ujczo said he understands that members of Congress are wary of endorsing a deal that disappoints key industries and donors.

For example, negotiators have barely tackled the irritants of dairy, and pharmaceuticals.

“There’s not a member of Congress that wants to touch NAFTA right now,” Ujczo said. “Once you start putting agreement text out there there’s going to be winners and losers. And in an election year, the losers can make themselves heard.”

The Canadian case for a speedy conclusion is that it’s a pretty good deal now and it might not get better.

Trudeau and others argue that negotiators have practically resolved the biggest cause of the United States trade deficit with Mexico, supposedly the very reason Trump wants these negotiations—autos.

There is another fear from those pushing for a quick agreement: that greater delay means greater risk that talks fall apart. Some of the politicians involved now won’t even be around if this continues into next year, as Mexico will have a new government and the U.S. will have a different Congress.

Meanwhile, all three countries insist they’re prepared to keep talking. They just haven’t decided yet for how long. Ujczo expects one more push for a deal, then a slowdown next month for the Mexican election, and another try in 2019.

Here are some key flashpoints in the talks involving Canada: