Freeland not returning immediately to Washington after briefing PM on NAFTA

Lead negotiator Steve Verheul and David MacNaughton, Canada's ambassador to the United States, will be returning to Washington immediately to resume negotiations on Thursday 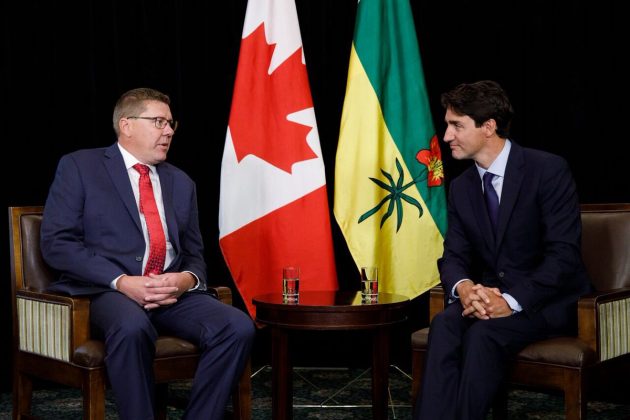 SASKATOON—Canada’s negotiating team spent several hours Wednesday updating Prime Minister Justin Trudeau on the state of NAFTA talks and getting his marching orders for the days ahead.

Foreign Affair Minister Chrystia Freeland refused to go into any detail about the issues on which the prime minister needed to sign off or what instructions she and the rest of the NAFTA team received.

However, she said lead negotiator Steve Verheul and David MacNaughton, Canada’s ambassador to the United States, would be returning to Washington immediately to resume negotiations on Thursday.

Freeland herself will not be returning to Washington right away, but said she’ll be keeping in close contact with her American counterpart, trade czar Robert Lighthizer.

She said the fact that she and Lighthizer are not immediately scheduled to meet again should “absolutely not” be taken as a sign that the talks are stalled.

“This is absolutely a process which is moving forward. It is a continuous negotiation,” Freeland said after her second briefing of the day with Trudeau.

“In negotiations, you do work and resolve the issues that you can at the ministerial level and then you reach points where what is needed is continued technical work.”

Freeland, Verheul and MacNaughton flew in from Washington on Tuesday to brief the prime minister in Saskatoon, where he was attending a Liberal caucus retreat.

Freeland said the atmosphere surrounding the talks continues to be positive, and she believes a good deal for all three NAFTA partners is within reach.

“Getting there is going to take goodwill, good faith and flexibility on all sides,” she added.

While Trudeau has been consulted throughout the 13-month negotiation, the face-to-face meetings with the negotiating team Wednesday suggested there were some big—and potentially politically loaded—issues to settle.

“This is an important time in the negotiation and so it was really important for me, for the negotiators to speak directly with the prime minister to brief him on the issues and to have him give us his instructions on where to move going forward,” Freeland said.

Earlier, in a brief speech opening the caucus retreat, Trudeau went out of his way to praise the “formidable, tireless” Freeland and her determination to get a deal that is good for Canada. He reiterated his assertion that no deal is better than a bad deal.

“We need to engage with the United States. They are our largest trading partner.”

Quebec Premier Philippe Couillard, who is the midst of an election, said Wednesday he wouldn’t accept an agreement that doesn’t meet the approval of dairy farmers in his province.

While Trudeau has vowed to protect Canada’s system of supply management which regulates the price of dairy, eggs and poultry, he has also indicated he’s willing to be flexible on allowing some limited additional imports, as was done in the Trans Pacific and European Union trade deals.

However, dairy farmers maintain they’ve already made enough concessions and shouldn’t have to do so again to get a NAFTA deal.