‘When did the dinosaurs die?’: Canada, Mexico refuse to discuss U.S. auto proposals

Negotiators say the U.S. NAFTA demands are so unworkable they will encourage automakers to merely shift production to Asia and cough up an import tariff 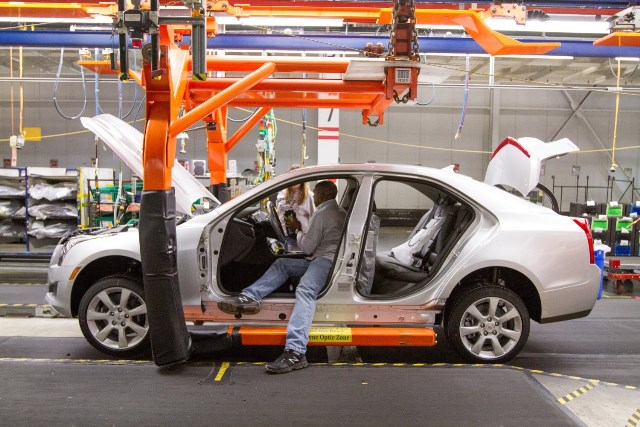 During the last round of talks, the U.S. stunned its partners with a demand that auto companies quickly transform their supply chains to benefit U.S. parts suppliers. PHOTO: GM

MEXICO CITY—The United States negotiating team found itself squeezed at home and abroad during NAFTA talks on Monday, with various actors from Canada, Mexico and within the U.S. pressing it to reconsider demands called unworkable and unworthy of serious bargaining.

The Canadian and Mexican governments have refused to produce a counter-proposal at the current round of talks on auto policy and are instead delivering a presentation on the self-inflicted damage they claim it would wreak upon America.

Their case was bolstered within the U.S. Senate.

A major auto association told a hearing that the current proposal could induce companies to leave this continent and simply pay import tariffs. This was on the same day that 18 U.S. senators sent a letter demanding the administration conduct an economic analysis before making any changes to NAFTA.

The U.S. stunned its partners by demanding that car companies quickly transform their supply chains to boost North American content; ensure half of a car’s parts come from the U.S.; use a new, stricter formula for calculating the origins of a car’s components; and do it all within a year.

”No vehicle produced today could meet such an onerous standard,” the Senate hearing was told by the Alliance of Automobile Manufacturers.

”This proposal is unprecedented and would have significant ramifications on our industry and the U.S. economy, as a whole.”

The U.S. negotiating team is urging people to tone down the rhetoric.

It apparently views such proposals as a starting point. An American source familiar with the talks pointed to evidence of the U.S. willingness to negotiate in good faith: the very broadly phrased list of American objectives published online last week.

In a few cases, that list includes specific numbers–like the demand that Canada relax its duties on online purchases by $780. In the case of automobiles, though, there are no numbers—just a reference to a desire for U.S. content in cars.

The source said this is normal in negotiating. But what’s less normal, the source said, is the public rhetoric by the Canadian side, with talk of red-lines and non-starters that will make it harder to advance negotiations.

The Canadians adopted a deliberate strategy at this round of proposing nothing on the hardest issues.

Instead, they will deliver a presentation and demand details. Along with Mexico, Canada will press the American side for clarity on how the auto proposal would work, with the subtext of that conversation being their belief that the proposal would not, in fact, work at all.

One stakeholder advising the Canadian government says the proposal was written in vague prose, light on specifics. For example, it never gave any indication of how to do the math on raw materials supposedly being added to the country-of-origin formula.

Flavio Volpe of the Auto Parts Manufacturers’ Association cites the examples of windshields and plastic components, which are made of sand, oil, and—going back further—carbon-based life forms that died millions of years ago.

“So if I’m a glass-maker, my raw material is sand. How am I going to trace (where) sand (comes from)? … Do you do that on the granule level? Do you do it by bag? Or do you have to send a picture of the beach?” Volpe said.

“When you say you’re going back to the base raw materials that’s what you’re talking about. So when did the dinosaurs die? And where did they die? And can we claim ownership of that?”

Multiple sources say the Canadians want to press the U.S. to refine its own offer on autos, before making a counter-proposal. Canadian officials have noted the internal U.S. opposition to the American proposal, including from six dozen American lawmakers who wrote a letter last week blasting it and the hearing before the Senate on Monday.

The senator who convened the hearing opened it by praising NAFTA.

”The positive economic impact of the current agreement is no secret to the people in this room or to the citizens of Texas,” said Sen. John Cornyn.

”The data is staggering and the verdict is clear: NAFTA worked as intended.”

He pressed a U.S. trade official on some of the proposals. That official, Stephen Vaughn, said he understands industries are concerned and that’s why the U.S. wants to wrap up a deal quickly, with a target date set for spring.

But he insisted other countries will have to make concessions.

”We do not expect these negotiations to be easy,” Vaughn said.

”For a very long time, our NAFTA partners have enjoyed an agreement that is tilted in their favour. They do not want to give up that advantage and we can understand why they feel that way. But our job … is to represent the people of this country _ and they deserve a better deal.”

The Canadian side showed more unity at the talks.

Sitting next to him, his Ontario counterpart Jeff Leal echoed that: ”Sea to sea.”