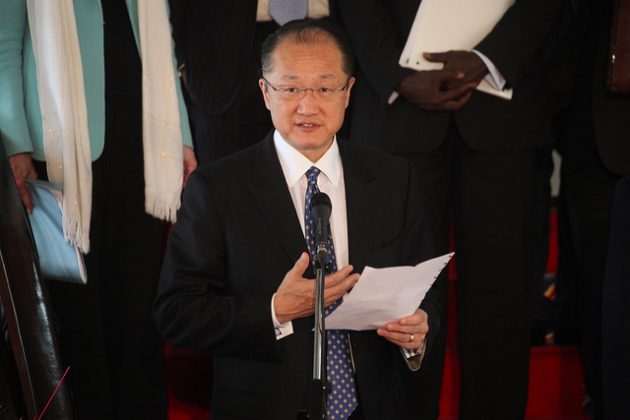 NUSA DUA, Indonesia – The heads of the World Bank and IMF appealed Thursday to the U.S. and China to cool their dispute over technology policy and play by world trade rules, as tumbling share prices drove home potential perils from a clash between the world’s two biggest economies.

Global economic growth is slowing but remains strong, Christine Lagarde, managing director of the International Monetary Fund, said on the sidelines of the IMF-World Bank annual meeting, being held this week on the Indonesian island of Bali.

Countries are mostly in a “strong position,” she said, “which is why we believe we are not seeing what is referred to as ‘contagion.”’

But the gyrations that rocked Wall Street the day before and Asia and Europe on Thursday, taking the Shanghai Composite index down 5.2 per cent and Japan’s Nikkei 225 nearly 4 per cent, do partly reflect rising interest rates in the U.S. and some other countries and growing uncertainty over trade, she said.

“It’s the combination of the two that is probably showing some of the tensions that we see in terms of indices, short-term indicators as well as possibly market volatility,” Lagarde said.

The U.S. and Chinese exchanges of penalty tariffs in their dispute isn’t helping, she said.

Her advice was threefold: “De-escalate. Fix the system. Don’t break it.”

She acknowledged that the World Trade Organization, based in Geneva, has made scant headway in recent years toward a global agreement on trade rules that can address issues like complaints over Chinese policies U.S. President Donald Trump says unfairly extract advanced technologies and put foreign companies at a disadvantage in a quest to dominate certain industries.

“Our strong recommendation is to escalate work for a world trade system that is stronger, that is fairer and is fit for the purpose,” she said in opening remarks.

Somewhat obliquely, she said policies aimed toward an excessively “dominant position” were not compatible with free and fair trade.

The IMF has downgraded its forecast for global economic growth to 3.7 per cent this year from its earlier estimate of 3.9 per cent. It also issued reports this week on government finance and financial stability that warn of the risks of disruptions to world trade.

“Trade is very critical because that is what has lifted people out of extreme poverty,” Kim said. “I am a globalist. That is my job. That is our only chance of ending extreme poverty. We need more trade not less trade,” he said.

Kim said the World Bank has launched a “human capital index” to help rank countries by the level of their investments in such areas as education and health care.

Policies to build such human capital are among the “smartest investments countries can make,” he said.

He praised host country Indonesia, a democratic, Muslim-majority country of 260 million, for fostering strong growth but noted there was much room for improvement. The country is ranked 87th of 150 countries in the list.

Indonesia has endured a slew of disasters in recent months. Before dawn on Thursday, an earthquake collapsed homes on Indonesia’s Java island, killing at least three people just two weeks after a major quake and tsunami disaster in a central region of the archipelago killed more than 2,000 people and left perhaps thousands more buried deeply in mud.

Thursday’s magnitude 6.0 quake offshore north of Bali shook the area where the IMF-World Bank delegates are meeting, but there were no signs of significant damage.

The annual financial meetings take place at a time of growing concern over trends other than trade, such as moves to raise borrowing costs in the U.S. and some other regions to help cool growth and keep inflation in check. Rising interest rates are drawing investment flows out of emerging markets in Asia and Latin America at a time when growth in their exports is likely to slow.

Argentina and Pakistan, Venezuela and Zimbabwe are among countries grappling with crises. Concerns are growing, also, over slowing growth in China and rising debts among some developing countries resulting from projects associated with Beijing’s “Belt and Road Initiative” to develop ports, roads and other infrastructure.

Lagarde said the IMF will send a team to Pakistan in the coming weeks after a meeting with its finance minister, Asad Umar, in which he requested emergency bailout loans.

The IMF chief did not say how much Umar had requested. Analysts say Pakistan is seeking $8 billion in loans to deal with a balance of payments crisis. Pakistan’s currency plunged by around 7 per cent earlier this week after word of the loan request was made public.

Asked whether IMF help might amount to a “bailout” for Chinese loans, Lagarde said any such help would have to be completely transparent.

“In whatever work we do we need a complete understanding and complete transparency about the nature of a debt that is bearing on a country,” she said.

The annual summit for global finance brings together central bankers and finance ministers, development experts and civil society groups from across the globe.

Bali has suffered terrorist bombings in the past, and the event was being held amid tight security. A convoy of armed personnel carriers was lined up alongside a beach path and access to the area was tightly controlled.

Still, about a dozen activists concerned with land grabs and other issues sometimes associated with World Bank-sponsored projects staged a brief, peaceful protest over the cancellation by local authorities of a conference they were to hold in the nearby city of Denpasar.

“If they don’t want to ever hear our voices, what kinds of projects are we expecting?” said Joan Salvador, a member of a Philippine women’s group.

Those involved had badges allowing them to enter the tightly guarded venue, and an IMF official said she would convey their concerns “to the highest levels.”