Ship was docked when one of its cargo cranes suffered failure that sent cabin, jib assemblies crashing down into cargo hold 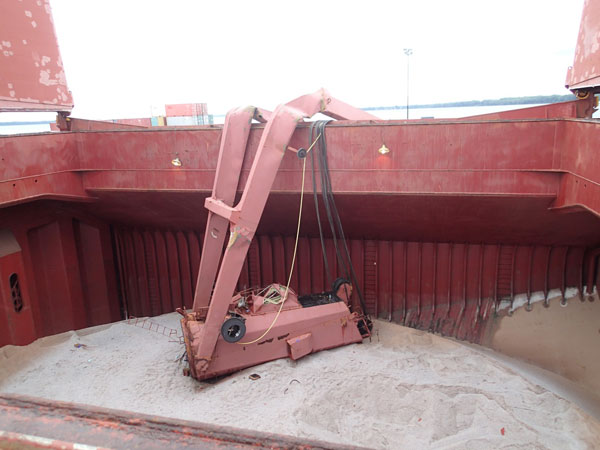 Safety regulators say a broken slewing ring bearing led to the collapse of a cargo crane aboard a ship in Quebec in August. PHOTO TSB

GATINEAU, Que.—A “catastrophic failure” aboard a cargo ship in Quebec over the summer has prompted federal safety regulators to issue a warning to vessel owners.

The Transportation Safety Board of Canada (TSB) said a bulk carrier was docked in Becancour, Que., across the St. Lawrence from Trois-Rivieres, Que., in August when one of its cargo cranes suffered a failure that sent the cabin and jib assemblies crashing down into a cargo hold, injuring the crane operator.

The safety agency traced the failure to a broken slewing ring bearing.

“There is a possibility that the same progressive failure of a slewing ring bearing will occur on any vessel fitted with similar cargo handling cranes,” the agency said in a statement, noting there is no known central database identifying ships outfitted with the cranes.

The bulk carrier involved in the incident was one of nearly 450 built at various shipyards in China between 2008 and 2014.

It was an electro-hydraulic jib crane, according to the TSB, and its slewing ring bearing assembly was manufactured by Dalian Metallurgical Bearing Co. Ltd. of China

According to the TSB, nearly 450 ships worldwide may be at risk of a similar incident.

The agency said vessel owners should take whatever measures considered appropriate to ensure the integrity of any similar unit in service aboard other ships.