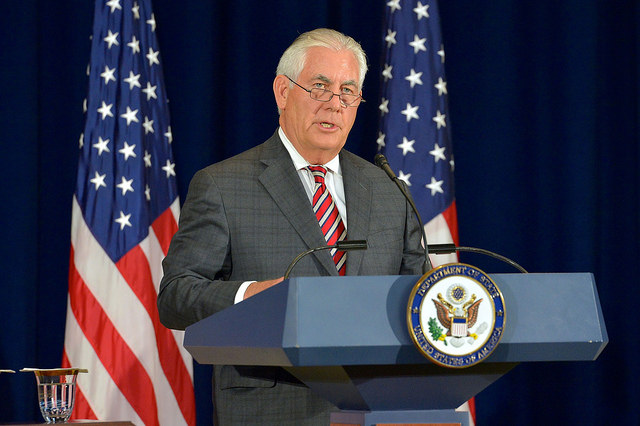 NEW YORK—As Exxon faced the prospect of new climate regulations, the energy giant’s leaders sought a full understanding of how they would affect the bottom line, former CEO and ex-Secretary of State Rex Tillerson told a court Wednesday in a securities fraud lawsuit brought by the New York attorney general’s office.

Democrat Letitia James’ office says ExxonMobil Corp. deceived investors about its future profitability. The Texas energy giant says it did nothing wrong and indeed is an industry leader in gauging potential climate costs.

The lawsuit claims Exxon essentially kept two sets of books—telling the public that it was taking into account the costs of potential future climate regulations, while underestimating those costs behind the scenes as it made investment decisions and assessed the value of its oil and gas reserves.

The attorney general’s office argues the discrepancy misled investors about the company’s exposure to climate costs.

The trial, which started last week, seeks US$476 million to $1.6 billion in damages for shareholders. But the money isn’t all that’s at stake: The case could be a bellwether for how investors view oil and gas companies’ prospects in light of global warming and the new regulations it’s expected to spur.

Tillerson said that Irving, Texas-based Exxon took climate change seriously. “We knew it was a real issue,” he testified Wednesday.

During his roughly 10-year tenure as CEO, the company supported the concept of a carbon tax, backed the international Paris agreement on combating climate change and in 2007 created a system that tries to predict how regulations worldwide might reduce demand for oil and gas, he noted.

“We tried to understand how this was going to affect everything,” he said. He said the company had two sets of climate-risk calculations—one for the broad-level “proxy costs,” another for “greenhouse gas costs” to figure how local regulations might affect specific projects—in order to get the “best assessment.”

Asked why carbon costs were figured differently in the two metrics, he said “they were for different uses within the organization.”

The case has revealed that Tillerson used the email alias “Wayne Tracker” while at Exxon. The attorney general’s office has previously suggested it might have been used to discuss climate change, but the matter hasn’t been raised in the first few hours of Tillerson’s testimony Wednesday.

The company says the account was just a way to streamline communications among top Exxon executives.

“Would ExxonMobil have any incentive to lowball the cost assumptions it used?” company lawyer Ted Wells Jr. asked Tillerson in court Wednesday.

“No,” the former CEO replied. “We would be misinforming ourselves.”

The Texas oilman left a career at Exxon to serve as President Donald Trump’s first secretary of state, from February 2017 until Trump fired him by tweet little over a year later.

The two had been at odds over various issues, including global warming. Tillerson had opposed Trump’s plan to pull the Paris accord.