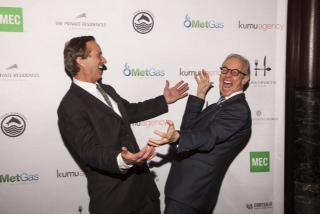 While both agreed clean energy is an imperative, the two parted ways on how quickly the world can develop a new energy economy and shed the coal habit.

Kennedy took aim at Canada’s resource sectors, saying regulators and corporations are “treating the planet like a business in liquidation.”

He said one out of every eight people on the planet are dying as a direct result of burning coal and oil.

“If you’re in an industry that’s killing one out of eight people…that’s like [selling] cigarettes,” Kennedy said.

Wal van Lierop, a technology and energy investment veteran, had a more pragmatic take—pointing to the need for fossil fuels as a transitional strategy.

“Most people don’t have the money currently to pay for a Tesla,” he said.

“We are all hooked on hydrocarbons. And those of us in the world who are not hooked yet would be happy to [become] hooked. We need breakthrough technologies to make hydrocarbons more sustainable.”

Kennedy called for major policy and regulatory shifts—including a carbon tax in the US—to make corporations pay the “true cost” of bringing their products to market, and to get consumers involved in clean energy.

“We should turn every American into an energy entrepreneur and every home into a power plant.”

Both agreed energy regulations are too fragmented—managed at a provincial and state level when a national approach could remove barriers to selling clean energy into the grid.

Infrastructure was cited by both as a critical component. Without robust grid and energy storage technologies, the market will remain stymied, they said.

More GLOBE coverage:
Cleantech trends that will change our future