Neonic pesticides killing all sorts of creatures we depend on, say researchers 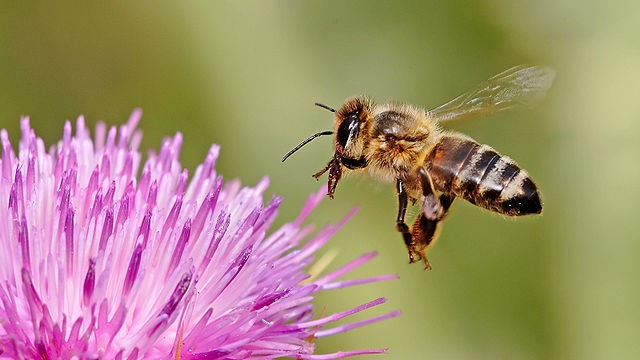 Honeybees are responsible for 80 per cent of the pollination in crops that feed one-third of the world’s population. PHOTO: Fir0002, via Wikimedia Commons

OTTAWA—A group of international scientists meets today to try to convince parliamentarians there is no longer any doubt that common agricultural pesticides are toxic chemicals which are killing off honey bees.

The scientists represent a task force on pesticides within the International Union for Conservation of Nature, which in 2015 released a comprehensive review of more than 1,100 peer-reviewed research studies on neonicotinoids.

Neonicotinoids, also known as neonics, are nicotine-based pesticides commonly used by farmers to help keep everything from field crops to fruit orchards free of pests like aphids, spider mites, slugs and stink bugs.

After beekeepers started sounding alarm bells about mass deaths of honeybees, scientists began to zero in on neonics as one of the culprits. Bees were consuming pollen contaminated with neonics as well as flying through chemical-laden clouds of dust from farm fields.

But bees, said Bonmatin were only the most “visible part of the problem” because beekeeping is a big business and without bees, billions of dollars of farm crops would go unpollinated.

“Nobody cares about that. There is no money in these invertebrates. However they are giving a huge service to the quality of soil, to all the ecosystem services that we need.”

Research suggest neonics can affect reproduction, growth and movement for these species, as well as make them more susceptible to disease.

Bonmatin, vice-chair of the task force, said evidence from Europe suggests these chemicals don’t actually help farmers much. Since Europe clamped down on their use four years ago, there hasn’t been a substantial reduction in farm yields.

Lisa Gue, a senior researcher with the David Suzuki Foundation which is involved in the release of the updated report, said Canada has to catch up to Europe and ban the use of all neonics.

Since 2013 the European Union hasn’t allowed the use of the three most common neonics in any crops which attract bees and is looking at extending that to additional crops. France is phasing in a complete ban on all agricultural uses of neonics, with the full ban set to take effect next year.

A year after Ontario’s bee industry recorded the loss of 58 per cent of its honeybees in the winter of 2013-14, Ontario began phasing in limits on use of neonics but only for corn and soybeans. Quebec proposed similar regulations earlier this year. Vancouver and Montreal have both banned their use entirely within city limits.

Health Canada’s Pest Management Regulatory Agency has been studying neonics since 2012 and last fall came to a preliminary conclusion that one of them—imidacloprid—should be banned from use almost entirely after finding it was building up to toxic levels in surface and groundwater and killing aquatic insects that are a source of food for fish and birds.

Gue said even if Health Canada decides next year to ban imidacloprid that phase-in isn’t scheduled to even start until 2021.

“I do have hope policy-makers and regulators in Canada will see the report as a wake-up call,” she said.