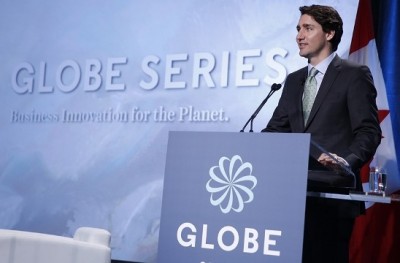 The Liberals have made the fight against climate change one of the motifs of their government since coming to power a year ago, and had a highly sympathetic Democratic partner in Washington under the administration of President Barack Obama.

The new American president-elect, by contrast, has suggested climate change is a hoax, wants the United States out of the Paris climate accord and plans to promote the exploration and development of fossil fuels, including coal.

Trudeau announced last month that he’d impose a national floor price on carbon dioxide emissions starting in 2018, rising to $50 per tonne by 2022.

“One of the things people in Canada and indeed around the world understand is that there is tremendous economic disadvantage from not acting in the fight against climate change; for not pushing towards cleaner jobs and reducing emissions; towards not showing leadership at time where the world is looking for leadership,” Trudeau said.

“We know that putting a price on carbon pollution is a way to improve our response to economic challenges, to create good jobs going forward and to show leadership that quite frankly the entire world is looking for, along with the solutions that go with it.”

It’s clear, however, that a Trump presidency is going to complicate the Liberal government’s plans.

“What we’ve got now is a situation where we could be put at a huge competitive disadvantage compared to the United States.”

Obama and Trudeau jointly announced major reductions in methane emissions last March during a state dinner at the White House, and later joined forces with Mexico on a broader North American climate and clean energy strategy.

No one seems to know how Trump will act on these policy fronts, but his choice of climate skeptic Myron Ebell to lead the transition team for the Environmental Protection Agency sends a powerful signal.

Energy expert Alan Ross, regional managing partner in Calgary for Borden Ladner Gervais, noted in an interview that the EPA is currently drafting regulations to reduce methane emissions by 40 to 45 per cent below 2012 levels by 2025.

“There was a movement towards integration, or at least further co-operation” between Canada and the U.S. on cutting carbon emissions, said Ross, who now predicts a “significant pivot” under Trump.

“There’s going to be a bit of a dislocation between what’s happening in Canada and what is likely to happen in the United States under a Trump administration.”

Ross suggests Canadian governments should be watching Congress closely. The Republican-held Congress has legislated fossil fuel subsidies and lifted the 40-year ban on U.S. oil exports during the Obama presidency. It certainly won’t stand in the way of Trump’s “business-friendly” agenda—which could further help U.S. producers, he said.

“Canada is a high-cost jurisdiction to begin with,” said Ross, and any measures that further help America’s low-cost producers will be felt competitively in Canada.

The U.S. doesn’t have a carbon price and no one was expecting one anytime soon, Scott Vaughan of the Winnipeg-based International Institute for Sustainable Development, said in an interview from Marrakech, Morocco.

Issues of competitiveness presumably were already taken into account when the carbon price plan was created, he said.

“I don’t see this as being any reason to fundamentally change the course that the government has set.”

The bigger questions, said Vaughan, relate to energy policy and Trump’s readiness to roll back executive orders made by Obama.

Trump’s stated position on reviving coal is “an absolute concern from a climate perspective.”

Vaughan suggested that under Trump, “maybe the United States will look a little like Canada did” during the previous Conservative government, when cities, businesses and provinces led the policy push.

“Leadership means being able to take the lonely path sometimes.”