Mount Meager is northwest of Whistler and was the last volcano in British Columbia to have a large explosive eruption, 2,400 years ago 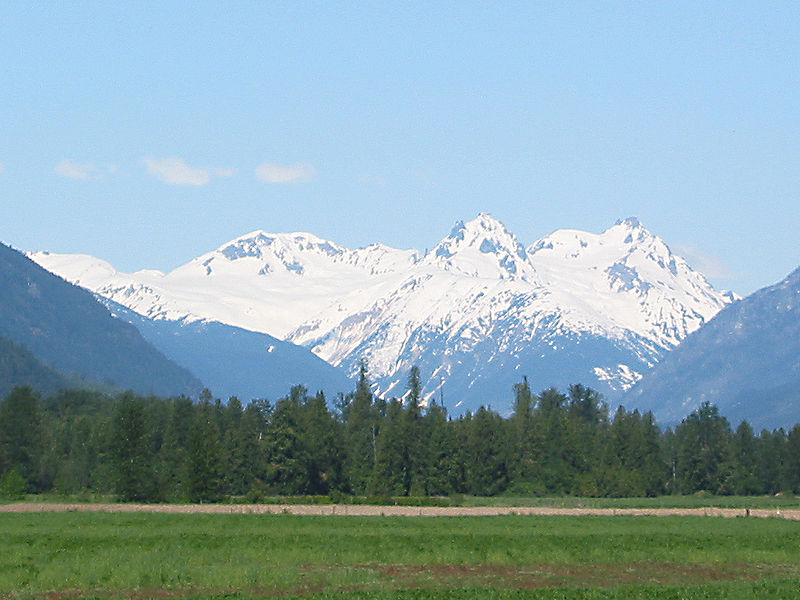 VANCOUVER—Climate change is causing glaciers atop Mount Meager in British Columbia to shrink, increasing the chances of landslides and even a new eruption, says an expert studying the volcano.

Glyn Williams-Jones, a volcanologist from Simon Fraser University in Burnaby, B.C., has been studying the fumaroles, or gas venting, of water vapour, carbon dioxide and hydrogen sulphide from the volcano for about two years. He and his team of students are also examining the increased risk of landslides caused by receding glaciers on the volcano.

Williams-Jones said the release of the gases worries him.

“The reason those fumaroles are coming, we believe now, is not because the volcano is more active but rather because of warming climate … those glaciers have been getting thinner,” he said. “There is this interplay between climate, ice-covered volcano and the response of those volcanoes.”

The churning gases don’t mean an eruption is imminent, he said, but the volcano is definitely not extinct.

Mount Meager is northwest of Whistler and was the last volcano in British Columbia to have a large explosive eruption, which was 2,400 years ago.

“That’s a blink of an eye in geological terms,” Williams-Jones said.

Volcanoes have their own characteristics and personalities, he said.

“It is a grumpy volcano in the sense that it has had some very large eruptions and also had these extremely large landslides. So I’d say yes, it’s on the grumpy side.”

Mount Meager has been forming over the last two million years, so it can be thought of as “multiple volcanoes old,” each sitting on top of each other, he said.

It is surrounded by ice and glaciers and the presence of a well-known hot spring nearby is evidence of its activity, he said.

Heat from the volcano and warming temperatures are thinning the glaciers, changing the way water moves through the rocks, he added.

The water’s movement and the acidic nature of the volcanic gases makes the rock of the volcano “rotten” and unstable, William-Jones said.

The slope of the volcano is moving northwest at the rate of about three centimetres a month, which increases the potential for a landslide, he said.

A landslide in 2010 from Mount Meager unleashed about 53 million cubic metres of rock and created a dam on Meager Creek about 300 metres wide and two kilometres long.

About 5,000 people downstream were evacuated because of the threat of a rapid release of the lake that formed behind the dam.

William-Jones said it’s possible the next landslide could be 10 times that size, with the greatest threat to residents of the Pemberton Valley.

If that happens, the change in pressure could destabilize the magma chamber beneath the volcano leading to an eruption, he said.

“There are a lot of big ifs and a lot of dominoes would have to line up for that to happen but we think this is a plausible thing to be concerned about.”

Williams-Jones said he’s not being alarmist, but there’s a need for monitoring and government attention.

He couldn’t say if or when the volcano would erupt, a calculation made even more difficult by the lack of data.

“The thing about volcanoes is that they’ve got their own personalities and they’re extremely unpredictable,” William-Jones said. “To say when Meager is going to reactivate is anyone’s guess. Even the best monitored volcanoes can catch you unawares and by surprise.”

Williams-Jones was at the site in September and said looking down into the mouth of the volcano is like looking into a cave about 50 metres long and 30 metres wide. The ice is about 100 metres at its thickest and gets down to about 50 metres as it thins around the caves.

There is no “mouth of hell” with a big, glowing, red or orange mass of lava, he said.

“What you’re looking at is this inclined opening with steam and gas pouring out. And melting water from the ice pouring down into it,” he said.