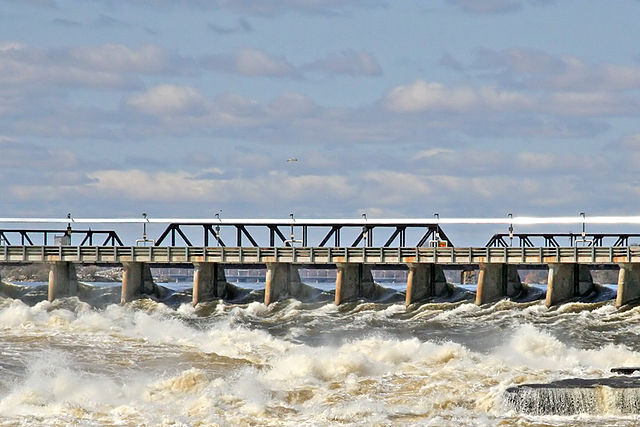 One bright spot on Canada’s report card came from electricity generation. The report found the country generates 80 per cent of its energy from clean sources such as hydro. PHOTO: Pierre Tourigny, via Wikimedia Commons

OTTAWA—A new report suggests Canada ranks 14th among 16 peer countries when it comes to environmental performance, with only the United States and Australia doing worse.

The report by the Conference Board of Canada on Thursday gives Canada a “D” grade based on nine indicators covering climate change, air pollution, and freshwater management.

On climate change, the agency says with 20.7 tonnes of carbon dioxide equivalent per capita, Canada’s greenhouse gas emissions are among the highest of the peer countries, with only the U.S. and Australia faring worse.

However, Canada gets an “A” rating for low-emitting electricity generation. The report says with nearly 80 per cent of Canada’s electricity being generated from low-emitting sources such as hydro and nuclear power, Canada is behind only Norway, Switzerland, France and Sweden.

Most of Canada’s provinces rank poorly in the agency report, with only Ontario earning a “B” grade. Quebec, British Columbia, and P.E.I. are given a “C” grade, Manitoba scored a “D” and Saskatchewan, Alberta, Newfoundland and Labrador, Nova Scotia, and New Brunswick were rated “D-minus.”

The Conference Board says while some of Canada’s poor grades can be explained by a large land mass, cold climate and resource-intensive economy, the results suggest there is a long way to go towards improving environmental performance.

“These results show that Canada needs to encourage more sustainable consumption. Protecting the environment from damage is not a problem for tomorrow but a challenge for today,” said Louis Theriault, the Conference Board’s vice-president for public policy.