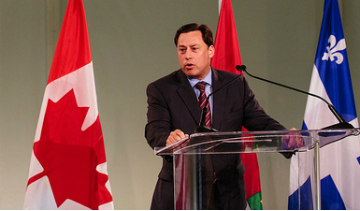 Brad Duguid, minister of economic development and innovation for the province of Ontario PHOTO: Ontario Ministry of Economic Development and Trade

OTTAWA—Ontario’s economic development minister says he fully expects the provinces and the federal government to agree on a long-awaited proposal that aims to ease Canada’s interprovincial trade barriers.

Brad Duguid told The Canadian Press on July 7 that he and his counterparts will present a package of recommendations to the premiers that seeks to open up the flow of goods and create jobs.

Duguid, who has been chairing the talks that resume Friday in Toronto, said the premiers will have the final word on whether to sign or amend a proposal that has been in the works for about two years.

“We will absolutely have a product to present to the premiers that I believe will be the most ambitious recommendations for free trade and regulatory-burden reduction the provinces ever had,” Duguid said in a phone interview.

“We expect to have an unprecedented proposal going to the premiers to help harmonize or mutually recognize regulations, which I expect will be one of the crowning achievements of the agreement.”

The premiers will have an opportunity to discuss details of the plan together when they meet later this month in Whitehorse, Yukon, Duguid added.

The Agreement on Internal Trade was signed in 1994 and, for years, Canada’s conflicting interprovincial regulations have been a headache for businesses and consumers.

One frequently cited example is how provincial regulations block the export of beer around the country.

Bank of Canada governor Stephen Poloz said in an April interview that Canada’s internal trade is actually less free in many respects than its external trade. Poloz called a trade barrier something that amounts to a barrier to economic growth.

But while Duguid was confident any lingering sticking points will be addressed at Friday’s meeting, his Alberta counterpart was more cautious.

“At the end of the day, this trade agreement is going to have far-reaching and long-term implications. Alberta’s position has always been that we want to take the time to make sure that we get it right.

“Should we get to that point tomorrow, great. But at the same time it’s my responsibility to ensure that we get it right for our country, for Albertans, for Alberta companies.”

Earlier this week, a media report said procurement was an area of concern for Alberta during the talks on internal trade. A spokesman for Bilous later called the report “an inaccurate description of Alberta’s position.”

On Thursday, Bilous declined to discuss Alberta’s specific concerns, saying, “I’m going to respect my colleagues at the table and the process for reaching an agreement.”

Jeremy Harrison said in an interview that considerable progress has been made, including developments on the premiers’ request for a plan consistent with Canada’s still-to-be-ratified free trade deal with the European Union.

But Harrison added that discussions were still necessary because of small issues, such as the varying ambitions of the provinces.

“I’m pretty hopeful that we’re going to be able to make that progress and have a deal to recommend to the premiers for their meeting in Yukon in a couple of weeks,” he said.

“We’ve never had an undertaking to, in a systematic way, reconcile regulations between provinces. So that’ll be new, which is really, really a big step forward.”

Nova Scotia cabinet minister Michel Samson agreed that there are still matters to be addressed, including a few that affect his province. However, he declined to go into detail ahead of the meeting.

“But we are going in the right direction and hopefully tomorrow’s discussions will bring us closer to a deal that we can present to our premiers,” Samson said in an interview.

Duguid said the recommendations will “aggressively” attack divergent regulations across the country that make it very difficult for businesses to do commerce nationally.

He also said the agreement will be open enough to allow provinces to be as ambitious as they want to be.

“We’re collectively very optimistic that we’ll be presenting to the premiers the most ambitious, broad free trade agreement both internally or externally that this country has ever signed on to.”