The aircraft, based on the existing BAe 146 four-engine regional jet, would generate electric power with a turbine inside the plane to turn the fan blades of its electric turbofan engine 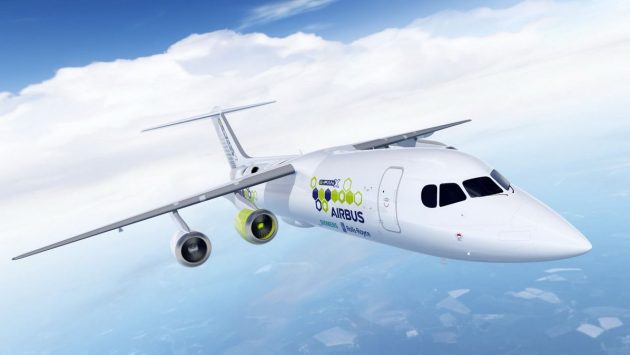 FRANKFURT—Airbus, Siemens and Rolls-Royce are teaming up to develop a hybrid passenger plane that would use a single electric turbofan along with three conventional jet engines running on aviation fuel.

The plane is an effort to develop and demonstrate technology that in the future could help limit emissions of carbon dioxide from aviation and reduce reliance on fossil fuels.

The three companies said Tuesday they aim to build a flying version of the E-Fan X technology demonstrator plane by 2020.

The aircraft would be based on the existing BAe 146 four-engine regional jet. The hybrid version would generate electric power through a turbine within the plane. That power would be used to turn the fan blades of the single electric turbofan engine.

If the system works, a second electric motor could be added, the companies said. 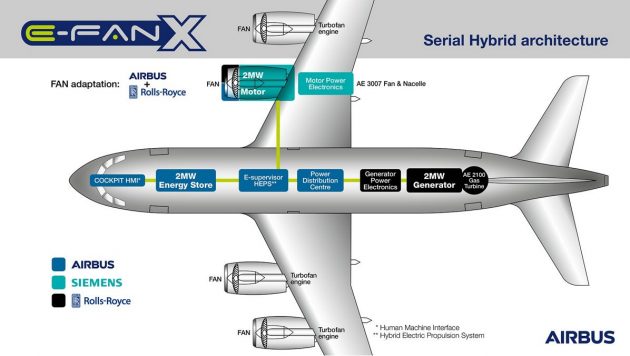 As part of the E-Fan X programme, Airbus, Rolls-Royce, and Siemens will each contribute with their extensive experience and know-how in their respective fields of expertise. PHOTO: Airbus

The companies said European plane maker Airbus SE would be responsible for building the aircraft’s systems into a working whole, control systems and flight controls. Britain-based Rolls-Royce plc would make the generator and the turbo-shaft engine, while German engineering company Siemens AG would deliver the two-megawatt electric motor to power the engine. Rolls-Royce the aircraft engine maker is distinct from the luxury car brand owned by BMW AG.

The companies said they were looking ahead to the European Union’s long-term goals of reducing CO2 emissions from aviation by 60 per cent, as well as meeting noise and pollution limits that they said “cannot be achieved with technologies existing today.” CO2—carbon dioxide—is a greenhouse gas that scientists say contributes to global warming.

Other projects for hybrid or electric planes are in the works. Kirkland, Washington-based Zunum Aero says it is working on a 12-seat hybrid-electric commuter jet. The company’s website lists its partners as Boeing, jetBlue Technology Ventures, and the Department of Commerce Clean Energy Fund.