A vote for Trump, a vote for ‘climate catastrophe,’ Al Gore says

October 12, 2016  by Kathleen Hennessey And Catherine Lucey, The Associated Press 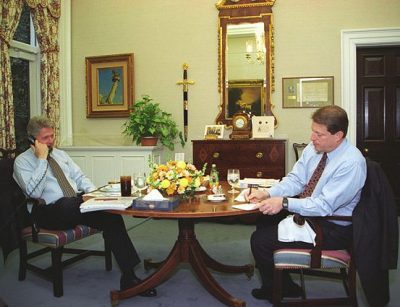 Now stumping for Hillary Clinton, Al Gore served as vice president under Bill Clinton during the ’90s before turning his attention to climate change

MIAMI—Al Gore laid out the environmental stakes of the presidential race in stark terms during a campaign stop for Hillary Clinton Oct. 11, arguing that electing her opponent would lead to “climate catastrophe.”

Vice president during Clinton’s husband’s eight years in the White House, Gore served as a closer for Clinton on climate change as the Democratic candidate seeks to appeal to activists and to young people, who consider this a key issue.

“The choice in this election is extremely clear. Hillary Clinton will make solving the climate crisis a top national priority,” the longtime environmental activist said, before issuing a strong warning about Republican Donald Trump. “Her opponent, based on the ideas that he has presented, would take us toward a climate catastrophe.”

Gore’s history with Florida, the ultimate swing state, lent extra weight to his appeal to get out and vote. Gore won the popular vote in the 2000 presidential election, but lost the presidency to George W. Bush after a lengthy Florida recount and a shocking Supreme Court decision.

Clinton, meanwhile, vigorously emphasized her plans to develop more clean energy, reduce fossil fuel production and build more weather-resistant infrastructure. She also continued her attacks on Trump, who has called climate change a “hoax” and said he would renegotiate the Paris Climate Agreement, an international treaty designed to curb the rise in global temperatures.

“We cannot risk putting a climate denier in the White House,” Clinton said.

During the primary contest against progressive Vermont Sen. Bernie Sanders, Clinton offered clean energy plans and came out against the Keystone XL Pipeline, which is opposed by environmentalists.

“Climate change is one of the issues where the difference between Hillary Clinton and Donald Trump is night and day,” said Clinton spokesman Brian Fallon. “For many of the core supporters we are seeking to galvanize in the remaining weeks of the campaign, including young voters, communicating the boldness of her plan is important.”

At the rally was Miami Dade College student Adam Demayo, 24.

“Every beach I go to is polluted,” said Demayo, a former Sanders supporter who said he is reluctantly voting for Clinton. “My children are going to, like, die. I want to dedicate my life to saving the planet.”

The world is on pace for the hottest year on record, breaking marks set in 2015, 2014 and 2010. It is about 1.8 degrees warmer than a century ago. Scientists have also connected man-made climate change to deadly heat waves, droughts and flood-inducing downpours.

Gore explored global warming in his 2006 documentary, “An Inconvenient Truth.”

Despite Clinton’s promotion of energy policies aimed at lessening climate change, there has not always been unanimity among her campaign aides about how strong that support should be. A series of hacked emails released Tuesday by WikiLeaks sheds more light on the campaign’s discussions. The Clinton campaign has neither confirmed nor denied the authenticity of the released emails.

A message released Tuesday by WikiLeaks from Clinton campaign chairman John Podesta’s hacked email account shows some aides were not totally on board with Clinton’s promise in June 2015 to raise fees on companies involved in oil exploration and fossil fuel production on federal land.

Clinton had broached the idea at her campaign launch in June 2015, but raising energy royalties could be politically explosive in western states where oil and gas firms have spent billions of dollars on extracting fuels.

In July 2015, campaign speechwriting director Dan Schwerin told Podesta in an email that “I think we’re going to have to make peace with our fossil fuels royalties, since she’s already promised that.”

On July 15, 2015, Clinton said she wanted to raise fees and phase out fuel extraction operating on public lands, but warned it could not be done quickly.

The hacked emails also show a discussion on how Clinton could show her opposition to the Keystone XL pipeline. Clinton originally said she shouldn’t take a position on the issue, because she didn’t want to interfere with the Obama administration as it considered whether to approve the project.

By August 2015, Clinton had decided to oppose it and the campaign discussed how to proceed. Wrote Schwerin on August 7, 2015: “We are trying to find a good way to leak her opposition to the pipeline without her having to actually say it and give up her principled stand about not second-guessing the president in public.”

Other emails in September 2015 show a discussion about making her position known in an op-ed column. But Fallon weighed in with concerns that such a move would look like “cynical political manoeuvring,” and suggested letting the information leak out after a meeting with labour leaders.

Clinton announced her opposition during a town hall in Iowa later that month, in response to a question from the audience.

—Stephen Braun and Bradley Klapper in Washington contributed to this report