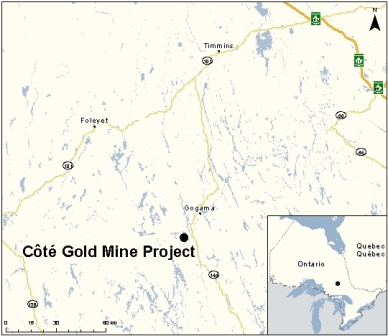 OTTAWA—Toronto-based mining firm, Iamgold Corp., which operates several gold mines in Africa as well as one in Quebec, is one step closer to developing a new site closer to home.

Canada’s minster of Environment and Climate Change, Catherine McKenna, has green-lit the company’s plan to develop its Côté Gold Mine Project, located in northeastern Ontario. Reviewing the Canadian Environmental Assessment Agency’s report on the impact of the new mine, McKenna said project “is not likely to cause significant adverse environmental effects.”

Situated in both Chester and Neville Townships, the proposed Ontario mine is approximately 20 kilometres southwest of Gogama, and 200 km northwest of Sudbury. Iamgold’s initial plan includes the construction of an open pit mine with a daily throughput of approximately 60,000 tonnes, an ore processing plant, as well as other related mining infrastructure. The planned mine has an estimated life of about 15 years

To begin developing the project, Iamgold still needs to secure the necessary approvals from several other regulators, including Fisheries and Oceans Canada and Natural Resources Canada.