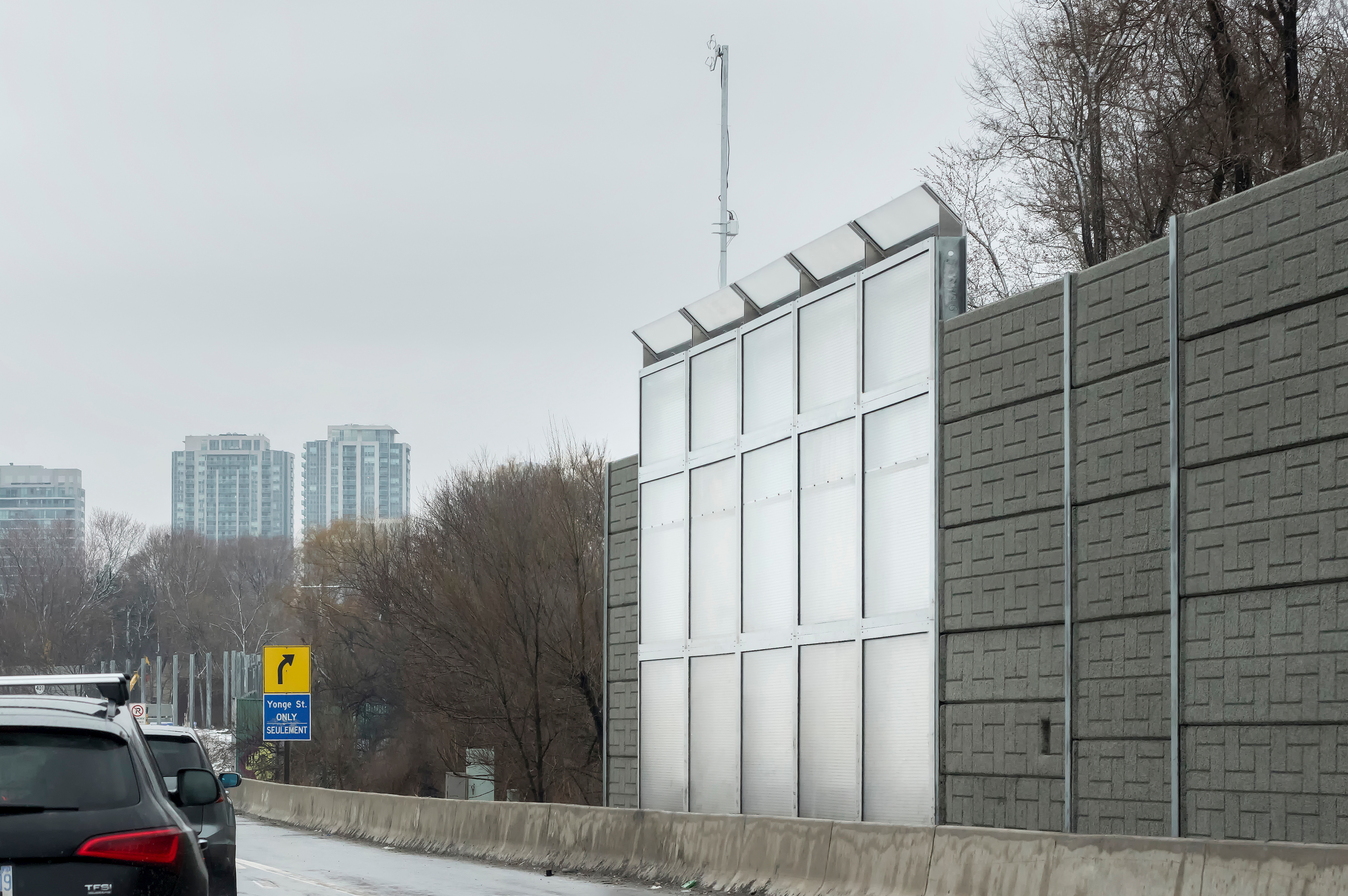 A SmogStop Barrier at Highway 401 and Bayview Ave. in Toronto. PHOTO: Envision SQ

While most of these deaths occur in the developing world, the industrialized world is still at risk. Health Canada estimates that 14,600 premature deaths per year in Canada can be linked to air pollution.

While a myriad of solutions are being deployed society-wide to stem the sources of this problem, one Guelph, Ont., firm is deploying a novel technology to filter and clean polluted outdoor air.

Envision SQ‘s SmogStop Barrier, which is installed in place of noise barriers on highways, works on two levels. Firstly, an aerodynamic design funnels dirty air upwards where it mixes with cleaner air, diluting pollution and directing it away from nearby neighbourhoods. Secondly, a coating breaks down pollutants and converts them into harmless gas — this process is powered by light. The barrier provides noise reduction as well.

Scott Shayko, the firm’s president and CEO, provided more detail in an interview with Canadian Manufacturing. “Based on the unique aerodynamic design, and the natural flow of air, it actually captures the pollution. When the pollution enters the barrier channel, because of the double-walled system, it’s forced towards a chemical coating powered by sunlight, where it simply breaks up.”

He said that harmful nitrogen oxides (NOx) are broken down into nitrogen and oxygen, which we breathe every day.

“It’s what considered a passive device. There are no mechanical moving parts, no electricity. It’s all powered by the natural flow of air and sunlight,” Shayko added.

In addition to ultraviolet (UV) sunlight, Shayko said the chemical reaction can also be powered by natural or artificial visible light, meaning it can work in places where UV light doesn’t always make it to the surface, and highway lighting keeps things working at night. “When we did the pilot study on Highway 401 [in Toronto] with the Ontario Ministry of Transportation, we actually had [pollution] reductions at night time. It was because there was some high mass lighting over top of the highway that illuminated our barrier, which continued to work and break down the pollution.”

Even in pitch black conditions, the barrier can still dilute pollution by facilitating the mixing of dirty air with cleaner air, Shayko said.

According to Envision SQ, its barrier can reduce traffic emissions in downwind neighbourhoods by 58% compared to a conventional noise barrier.

While the outdoor barrier is targeted to government and infrastructure clients, Envision SQ also offers an indoor solution for enterprises.

The SmogStop Filter applies the same combination of a photocatalytic coating and UV lighting (artificially produced) inside, to filter factory emissions and those given off by paint, printers, carpets and other sources. 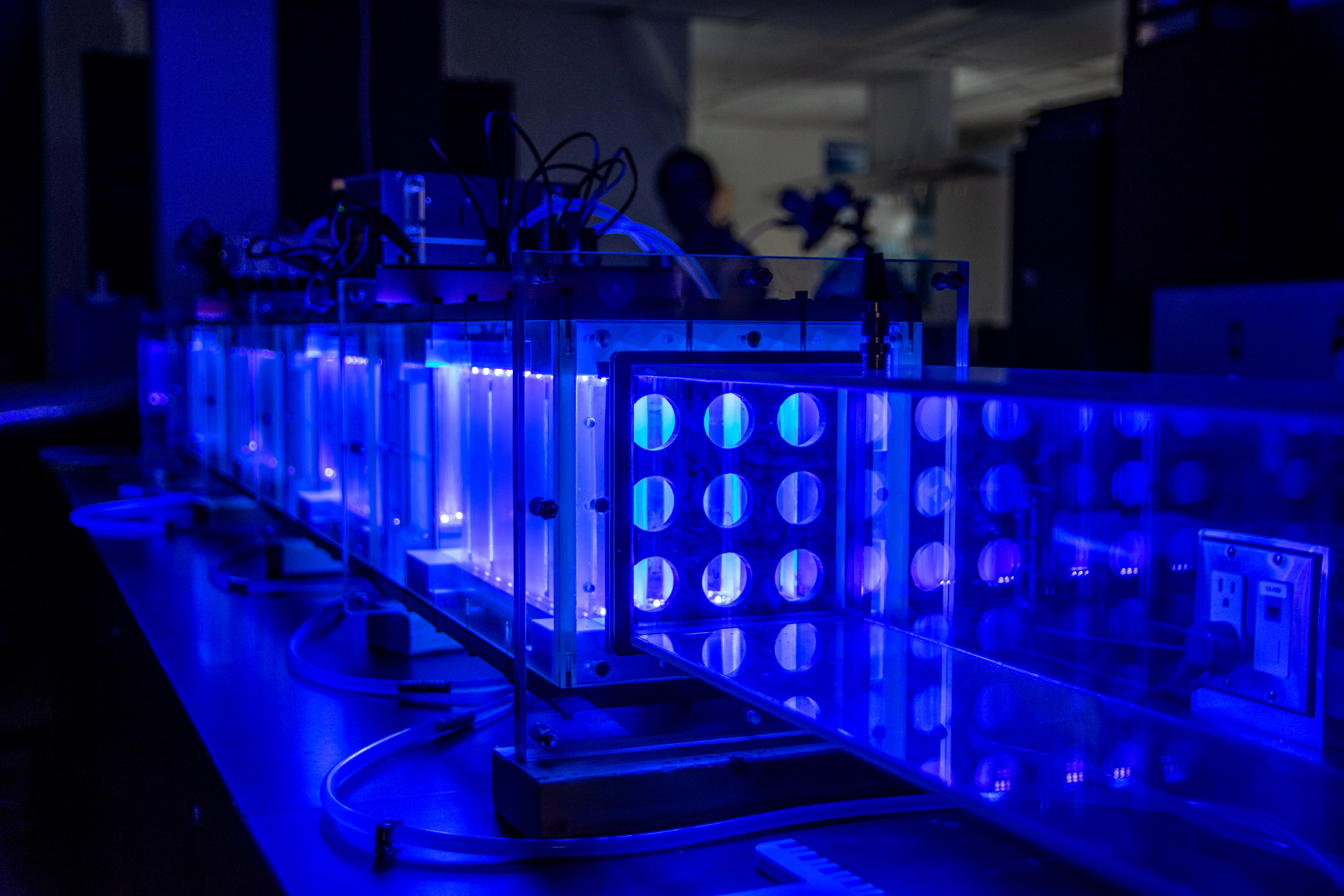 Shayko said the concept for the filter came about when manufacturers, such as Toyota Motor Manufacturing Canada, asked for SmogStop technology to use inside their facilities.

Beyond use in industrial facilities, Shayko said the filter is ideal for condo buildings, as it can integrate into existing HVAC systems. “Right now the HVAC you would have in a condo building doesn’t clean out hazardous NOx and volatile organic compounds (VOCs). Right now it only tackles particulates, which would be your standard filter that you have in your furnace at home. So by installing our filtration system, you can clean out these cancer-causing hazardous gases.”

Shayko explained that in addition to addressing harmful pollutants, his firm’s technology also filters odors. “Because our technology breaks down VOCs, it also breaks down a toxic compound known as terpenes. The smell of cannabis is caused by terpenes. We’re going to be testing our product in a cannabis facility in a way to mitigate the odor.”

The cannabis pilot project will be undertaken in April with an unnamed producer.

Shayko says there is interest in SmogStop’s odor filtration capabilities in the food industry as well.

“You’re going to see some really interesting things coming from our company,” Shayko continued, noting that in addition to its government and enterprise-focused products, “very soon, this year, you’re probably going to see one or two products that are for the consumer market.”

The firm is also expanding internationally with the help of a U.K. partner, acoustic barrier installer Gramm Barrier Systems Ltd., which is making inroads in Europe.

Also, “We’re looking at three partnerships in China, one for the barrier and two for our filter technology,” said Shayko. “So our plan was always to start in North America, then Europe and also China, and from there we’ll expand into other markets: South East Asia, Japan, and so forth.”