The 30 megawatt project marks an important milestone for floating wind power. The technology could open up new waters to wind development 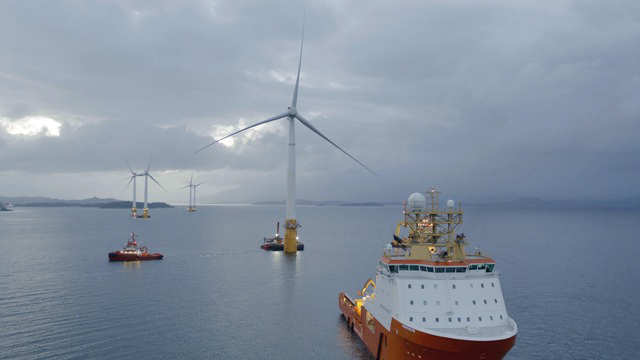 The first of five floating turbines has been towed into place at the Hywind wind park about 25 kilometres off Peterhead, U.K. PHOTO: Masdar

The company towed the first of five turbines into place at its Hywind wind park 25 kilometres off Peterhead, U.K. this week and is currently anchoring the six-megawatt turbine to the seafloor.

Until now, floating turbines have been limited to small scale demonstration projects.

Statoil spent six years testing its technology before sanctioning the Hywind project and other developers are also working to deploy the technology.

The Norway-based company owns a 75 per cent stake in the offshore project after selling a 25 per cent interest to Abu Dhabi, UAE-based renewable developer Masdar in January.

The four other floating turbines will be towed into place in the coming weeks. The floating towers were assembled outside Stord, Norway and require about four days to be towed across the North Sea to the wind farm site.

Despite having capacity to produce just 30 MW of power, the relatively small-scale site marks an important milestone for offshore wind power. Floating turbines are expected to open up new waters to wind power development and could save developers on material costs. Unlike traditional towers, which extend to the seabed, floating turbines use ballasted steel cylinders to stay afloat. They’re anchored to the seabed by mooring lines. At Hywind they’ll bob above the waves in water 95- to 120-metres deep.

Once the turbines are in place, crews will attach anchor lines and prepare the electrical cables that will carry power generated at Hywind to the mainland.