225 kilowatt turbine will power an electrolyser that splits water molecules 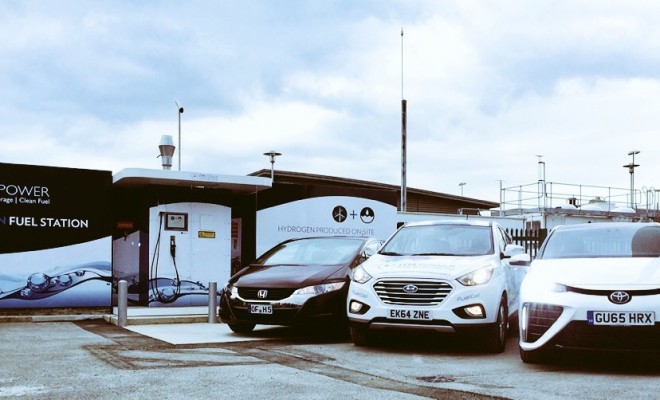 The company’s new facility in the UK with Hyundai’s, Toyota’s and Honda’s fuel cell vehicles. Many of the major automakers are beginning to produce hydrogen-powered cars. PHOTO: ITM Power

Located in South Yorkshire, close to the large population centres of Sheffield, Rotherham, Barnsley and Doncaster, the station is the first of its kind in the UK. It consists of a 225 kilowatt wind turbine coupled with an electrolyser, 220 kilograms of hydrogen storage space and a dispensing unit. It also houses a 30 kilowatt fuel cell system capable of providing backup power to nearby buildings.

“We are extremely pleased to be launching the first of the company’s hydrogen refuelling stations today, at this very accessible location off the M1 in South Yorkshire, and to provide clean fuel for the fuel cell electric vehicles that are now available from the auto OEMs,” Graham Cooley, CEO of ITM Power, said.

“This station will provide important reference for demystifying the ability to utilise renewable energy supply for its efficient conversion to clean fuel for clean transport emissionits, that is enabled by ITM’s rapid response PEM electrolyser platform and the super impreimpressive performance of fuel cell electric cars,” he added.

The station’s launch was supported by Hyundai, Toyota and Honda, all of which showcased their hydrogen fuel cell vehicles.

“It is very encouraging indeed that the UK’s hydrogen filling station infrastructure is developing,” Tony Whitehorn, CEO of Hyundai Motor UK, said, “We welcome this ultra-green new site in the north of England, which will serve a very large area and is clearly one of the most advanced sites ever constructed.”