Until now, offshore wind turbines have been restricted to particularly shallow waters. New ballasted technology has changed the rules of the game and is expected to open up a huge number of coastal regions to development 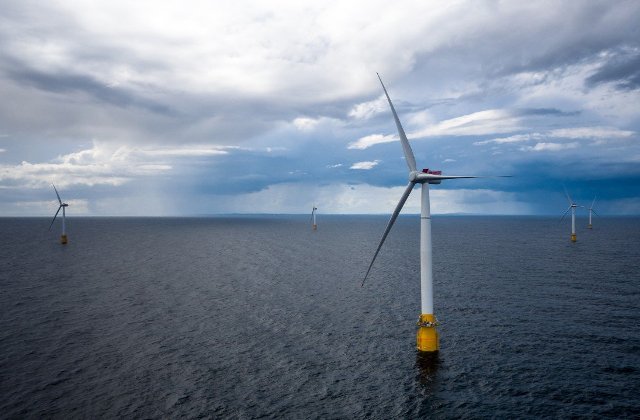 The five-turbine site about 25 kilometres off the Scottish coast has capacity to produce 30 megawatts of power. PHOTO: Øyvind Gravå / Woldcam/Statoil

PETERHEAD, U.K.—Bobbing in the waves off the northeast coast of Scotland, the blades of five floating wind turbines have begun turning in the cool North Sea breeze.

Statoil ASA—better known as a major oil and gas player—spent the past several months towing the site’s turbines across the North Sea from Stord, Norway and working to connect the novel floating turbines to anchor cables and Scotland’s electricity grid.

Earlier this week, the Norwegian company started sending power from Hywind Scotland back to shore. Along with producing energy to power approximately 20,000 U.K. homes, the milestone project could usher in a new era for offshore wind power and open up fresh regions of salt water to clean energy development.

Located about 25 kilometres off Peterhead, the world’s first floating wind farm has the capacity to produce 30 megawatts of energy. Statoil spent years developing the floating technology and has been operating a demonstration turbine to fine-tune the technology since 2009. While the new North Sea project’s 30 MW capacity is relatively small for an offshore wind park, it will put the technology to the test on a commercial scale for the first time.

“The learnings from Hywind Scotland will pave the way for new global market opportunities for floating offshore wind energy,” she said in a statement.

The turbines themselves float with the help of ballasted steel cylinders, which are anchored to the seafloor below by mooring lines. Off Peterhead, the water is about 100 metres deep, but Statoil says its Hywind turbines can be deployed in waters up to 800 metres deep. The company hopes the technology will help open up the 80 per cent of the world’s offshore wind resources currently off-limits to developers because depths greater than 60 metres aren’t conducive to building traditional towers.

Along with the novel turbines, Hywind Scotland also includes battery storage. Statoil and Masdar—a UAE-based renewable developer that owns a 25 per cent stake in the wind farm—have installed a 1 MWh lithium-ion battery storage system to help smooth out the project’s supply of power.