Workhorse Group, an Ohio-based drone developer, created the autonomously operated, battery-powered drone and the truck that deploys it 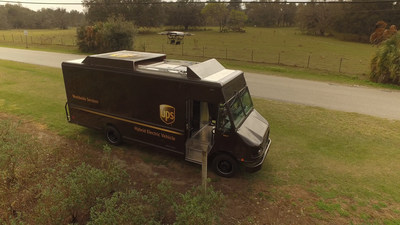 This test demonstrates the viability of drones as a part of UPS’ day-to-day deliveries. PHOTO: UPS Canada Ltd.

MISSISSAUGA, Ont.—UPS is experimenting with drones that can fly without an operator.

The company announced Feb. 21 that it has successfully tested a drone that launches from the top of a delivery truck, autonomously delivers a package to a home and then returns to the vehicle while the driver continues along the route to make a separate delivery.

Workhorse Group, an Ohio-based battery-electric truck and drone developer, built the drone and the electric delivery truck used in the test.

Workhorse’s drone docks on the roof of the delivery truck. A cage suspended beneath the drone, extends through a hatch into the truck. A driver inside loads a package into the cage and presses a button on a touch screen, sending the drone on a preset autonomous route to an address. The battery-powered drone recharges while it’s docked. It has a 30-minute flight time and can carry a package weighing up to 10 lb.

UPS has been testing automation and robotics technologies, including drones, for years.

In September 2016, UPS staged a mock delivery of urgently needed medicine from Beverly, Massachusetts to an island three miles off the Atlantic coast.

UPS is also utilizing drones to check inventory on high storage shelves in its warehouses.

Unlike all of the previous tests, the most recent UPS drone test shows how drones might assist in making non-urgent residential deliveries as part of the company’s day-to-day operations.

“Imagine a triangular delivery route where the stops are kilometres apart by road. Sending a drone from a package car to make just one of those deliveries can reduce costly kilometres driven. This is a big step toward bolstering efficiency in our network and reducing our emissions at the same time,” said Mark Wallace, senior vice-president of global engineering and sustainability, UPS.