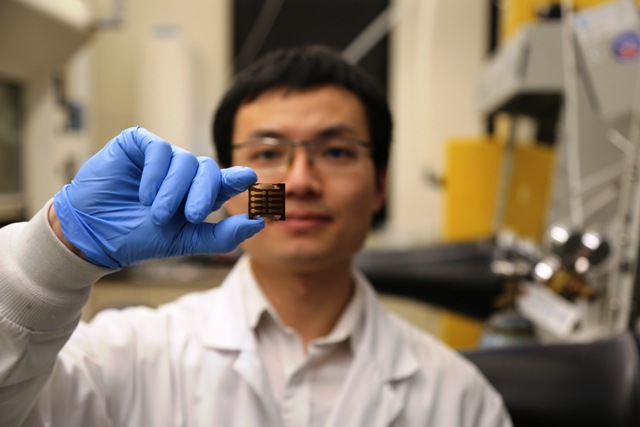 Hairen Tan, a post-doctoral researcher at the University of Toronto shows off a solar cell made with a new method that could simplify the perovskite manufacturing process. PHOTO: Kevin Soobrian

TORONTO—The days of silicon-based photovoltaics may be numbered.

Researchers at the University of Toronto have developed a new way to manufacture an alternative type of solar cell that could one day supplant conventional crystalline silicon technology—or at least greatly improve upon it.

While the falling cost of silicon solar panels has transformed the once fledgling solar industry into a market worth tens of billions of dollars, researchers and corporate players are looking to emerging perovskite solar technology to further slash the cost of harnessing sunlight. Unlike manufacturing silicon modules, which requires harsh solvents and high temperatures, perovskite lends itself to a cheap inkjet printing process—or even a spray-on method—and both are inching toward the commercial market.

A group of hybrid organic-inorganic compounds, perovskites were first identified as a potential solar energy technology back 2009 and have quickly become one of the most promising alternatives to silicon PV. Researchers have been studying the material in earnest since 2012 and have tested a range of different perovskite cells in a lab setting. They have even begun paring them with traditional silicon cells to raise solar efficiency ratings to new heights.

Oxford PV Ltd., a U.K.-based startup company that spun off Oxford University in 2010, is one of the leading private firms working with the new type of solar cell. It has attracted more than $20 million in investment from several firms, including Norwegian oil giant Statoil ASA.

“With a little further development work, perovskite can be ‘tuned’ to absorb different ranges of the solar spectrum meaning that in time, tandem cells could be produced with two (or more) perovskite layers, replacing silicon completely,” he added.

The latest advancement at the University of Toronto, published in the journal Science last month, marks a significant step forward for a specific part of the perovskite solar cell manufacturing process and brings the technology one step closer to the breaking out of the lab.

Like silicon solar cells, perovskite cells consist of several separate layers that interact to harness energy from the sun. The U of T team, led by post-doctoral researcher Hairen Tan, focused mainly on a part of the cell known as the electron-selective layer—a component that extracts electrons from the thin layer of perovskite crystals and allows the device to generate power.

Using a new chemical reaction, the researchers developed a way to grow the electron-selective layer, or ESL, in solution. The process reduces the amount of heat required to produce the ESL from more than 500 C to just 150 C. Along with cutting energy costs, the lower-temperature technique allowed the researchers to grow the ESL on an electrode without melting other components. 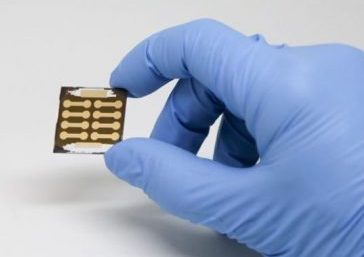 The cells made using the new process have an efficiency of 20.1 per cent. PHOTO: Kevin Soobrian

According to Tan, the new perovskite cells have an efficiency of 20.1 per cent—the best results ever produced using a low-temperature processing method—and not too far off the perovskite record.

Tan and his team have spent more than a year and a half on the project, but admit there’s still a lot of work to do to get the technology ready for the mass market.

“Crystalline silicon can work 25 years with a drop [in efficiency] of less than 20 per cent,” Tan said in an interview. “If perovskite can achieve the same stability, it will definitely be much cheaper.”

The U of T research team’s next step will be working toward this level of stability.

Currently, the cells made using the new process can retain about 90 per cent of their efficiency through 500 hours of use. For the new cells to truly compete with silicon PV, Tan will need to translate those hours into days. He is focusing on strengthening the chemical binding between the ESL and perovskite layer to improve the cell’s long-term stability.

Eventually, Tan thinks standalone perovskite may be able to give silicon a run for its money, but like Oxford PV, he said the most promising short-term application for perovskite solar cells is in tandem devices.

“Right now, crystalline silicon is almost approaching the theoretical limit efficiency, so that means we don’t have much space to improve anymore,” he said.

Combined with perovskite, however, silicon PV could be pushed closer to the theoretical Shockley–Queisser limit—at about 33.7 efficiency—or even exceed it.

Tan’s lower-temperature manufacturing process may help achieve that, but to make perovskite solar economical, researchers need to be sure the cells can continue producing power efficiently over a long period of time.

Oxford PV has faced similar obstacles—and Smyth said the company is now ready to begin testing their technology on a larger scale.

“We have proven the stability and efficiency of perovskite in the labs, under extensive testing regimes, but it also needs to be proven in real operational environments and at industry-standard scale,” he said.

The Oxford, U.K. company signed a joint development agreement with an unnamed global solar manufacturer last December to help transition its lab-scale technology to the mass market. It anticipates its technology could be ready for the production line by late 2018 or early 2019.

Beyond tandem cells—be they silcon-perovskite or perovskite-perovskite—researchers are also looking to integrate the new type of solar cells into high-efficiency building designs. Known as building-integrated photovoltaics, or BIPV, they eventually expect to be able to print or spray a layer of perovskite cells onto windows or building facades to produce power.