Kepler Energy's plan to harness the power of the depths 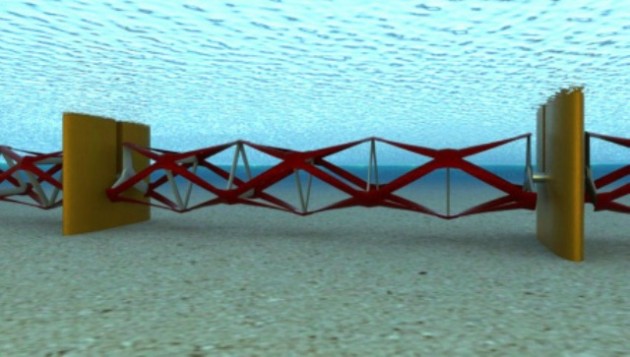 OXFORD, UK—Tidal energy schemes have failed to snatch the limelight and investment dollars the way wind and solar energy projects have over the past few years. With the exception of a few standout successes in land-lacking countries such as South Korea, tidal energy has simply been overpowered. Nevertheless, English startup, Kepler Energy, is looking to change all that.

The company plans to build a tidal energy “fence” capable of generating energy in relatively shallow, low-velocity tidal waters. Kepler says the technology would be particularly useful along the UK’s coastline, as well as similar areas worldwide.

“As our tidal technology can operate in lower velocity tidal waters, there is greater scope for its deployment in the UK and overseas,” Peter Dixon, chairman of Kepler Energy said. “It means that we can achieve greater economies of scale as our projects are deployed.

For its first fence, the five-year-old company is staying close to home. It is looking to develop a 30 megawatt project in the Bristol Channel – a large inlet that separates Wales from southwest England. Though the project remains only on paper in the early planning, funding and regulatory stages, if built, it would cover nearly one kilometer and cost the equivalent of $292 million.

“The simplicity of the patented truss design ensures the minimum of moving parts exposed to the tidal flow, whilst electrical equipment and controls are housed in dry columns. The rotor installation methodology requires no high cost specialist vessels, and can use much longer ‘weather widows’ than axial turbines operating in harsh weather and wave locations,” the company said.

“We can happily co-exist with tidal lagoons, and the power peaks will occur at different stages of the tide, meaning that the combined output into the Grid will be more easily manageable. In addition, our levelised costs of production will be in the range £100 to £130 per MWh for utility scale production, so costs will be cheaper than lagoons and in time we will be cheaper than offshore wind generation,” Dixon added.

Kepler Energy, which holds the exclusive global license for the technology, is embarking on a funding round to take the project through the development phase and the planning process later this year. Though the technology is regarded as environmentally benign, it will be subject to a rigorous environmental impact assessment during the planning process to ensure that it holds no significant risk to marine life and other users of the sea.

Since its establishment Kepler Energy has received assistance from Altran, Gurit, Mojo Maritime, GE, Royal Haskoning and other companies to develop its technology and explore sites where its tidal turbine technology could be deployed. Though the company is proposing a one-kilometer fence for its first project, it noted tidal fences of 10 kilometers or longer may be possible in the future.