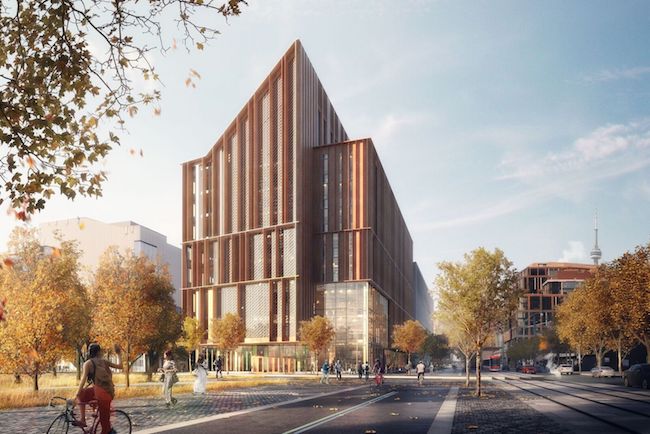 TORONTO—A 12-storey building inherently different than any other in the city will soon rise on Toronto’s eastern waterfront.

Dubbed the Arbour, the building will serve as a campus building for the downtown Toronto college and house 16,250 square-metres (approximately 175,000 sq. ft.) of floor space. It will cost about $130 million to build.

“The Arbour is destined to become a landmark in the city, driving forward advancements in sustainable innovation and green buildings throughout Canada,” Anne Sado, the college’s president, said in a statement. “We hope that this building will serve as an example on how we can incorporate sustainability into all aspects of our lives, including where we learn, work and play.”

Geroge Brown picked the winning design team from a field of four finalists, determining the winner based on the innovative use of wood, energy use and building resilience, among other factors. Vancouver-based Acton Ostry also recently completed work on the 18-storey Brock Commons Tallwood House at the University of British Columbia.

Recent advancements such as special cross-laminated timber plates—which function like concrete slabs—have made taller wood buildings feasible. The innovative approach is seen as both sustainable and supportive of broader Canadian industries. Building codes in several provinces, including B.C., Ontario and Quebec, have been amended to support the new type building.

The Arbour is expected to become home to Canada’s first Tall Wood Research Institute. It will also house the George Brown school of Computer Technology and other research facilities dedicated to climate-friendly building practices.

Crews are expected to begin work on the structure on a 0.23 hectare site at Queens Quay East and Lower Sherbourne Street in 2021.