by Cleantech Canada Staff, with a file from the Associated Press  April 8, 2016 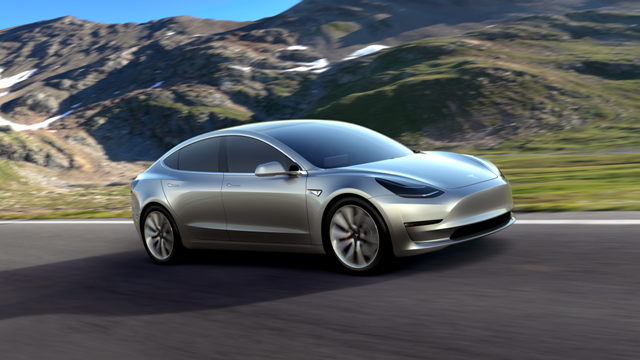 The automaker has racked up about US$14 billion in pre-orders for its new vehicle, which is less than half the cost of any of its previous models. PHOTO: Alexis Georgeson/Tesla

“Definitely going to need to rethink production planning,” Musk Tweeted last Friday, when the orders exploded out of the gate and stood just short of 200,000.

Thousands more customers have since put down a $1,000 deposit on the automaker’s Model 3, which comes with a $35,000 price tag and has a range of 215 miles per charge.


Less costly Model 3 will test Tesla’s shift to full-fledged automaker
Musk said the pre-orders represent approximately $14 billion in value at the end of the first week. He added that only five per cent of customers ordered the maximum of two Model 3s—a fact the CEO inferred as indicating a low level of speculation.

With an affordable price tag—at least drastically more affordable than any of its previous vehicles—Tesla is looking to transition from a niche automaker to a company capable of taking on the mass market. Most of the traditional American automakers have launched forays into the EV space, and tech companies such as Google and Apple are also aiming to enter the booming industry.

As the order pour in, Tesla will be saddled with a significant manufacturing challenge. Since the Palo Alto, Calif. company began operations in 2008 it has sold just 110,000 vehicles. Investors, however, remain confident; Tesla shares have climbed more than 10 per cent over March 30.