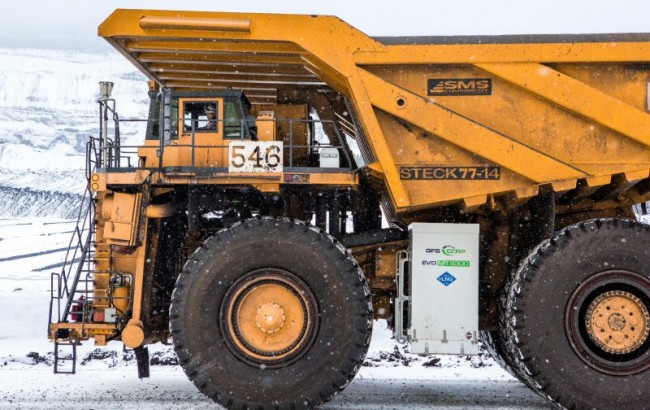 One of the haul trucks at Teck’s Fording River Operations in southeast B.C. retrofitted to use LNG fuel. PHOTO: Teck

VANCOUVER—Liquefied natural gas is powering six hauling trucks at a southeast B.C. mine, in what is the first use of the fuel at a Canadian mining site.

“LNG is a fuel source that has the potential to lower costs, significantly reduce emissions and improve environmental performance at our operations,” Don Lindsay, Teck’s president and CEO, said. “We are committed to minimizing our own carbon footprint while at the same time continuing to provide the mining products that are essential to building a modern, low-carbon society.”

The trucks are running on a blend of LNG and diesel, and the project is one of the steps the company is taking to reduce its greenhouse gas emissions as well as its cost structure.

Unlike diesel, LNG produces “virtually no” particulate or sulfur dioxide emissions, and reduces GHG emissions by as much as 20 per cent compared to straight diesel. Teck said there is the potential to eliminate approximately 35,000 tonnes of CO2 emissions annually at its steelmaking coal operations, as well as reduce fuel costs by more than $20 million annually by adopting the LNG and diesel hybrid fuel across its operations.

“Like British Columbia, Teck is a global leader in finding innovative ways to reduce GHG emissions while continuing to create opportunity,” B.C. Premier, Christy Clark, said. “It’s a concrete example of the difference clean-burning LNG can make in the fight against climate change.”

With the support of FortisBC, which is also financially contributing to the project and providing the gas, Teck upgraded its Fording River truck maintenance shop to support LNG.

The pilot is scheduled to run until mid-2016 and is designed to provide Teck with more information about the potential of using LNG more broadly across its entire haul truck fleet.