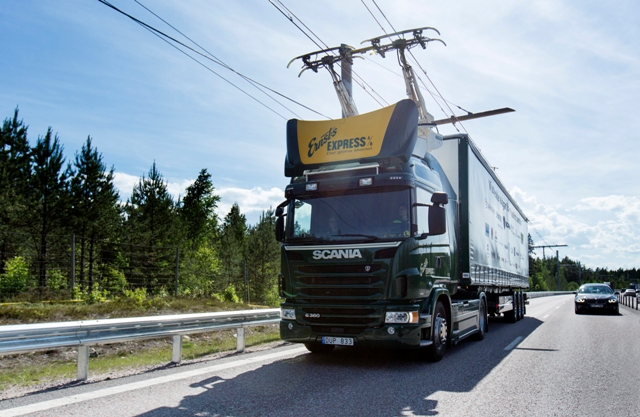 MUNICH—Amid the rush of vehicles on Highway E16—a few kilometres outside Gävle in central Sweden—Siemens AG and Swedish heavy vehicle maker Scania AB have powered up the world’s first eHighway.

Running along a two-kilometre stretch of road, and designed to slash emissions in the carbon-intensive transportation industry, the pilot project will test an electrified overhead wire system, or catenary, specially-designed to allow transport trucks to draw power from the grid.

“By far the greatest part of the goods transported in Sweden goes on the road, but only a limited part of the goods can be moved to other traffic types,” Anders Berndtsson, chief strategist at the Swedish Transport Administration (STA), said. “That is why we must free the trucks from their dependence on fossil fuels, so that they can be of use also in the future.”

“Electric roads offer this possibility and are an excellent complement to the transport system,” he added. 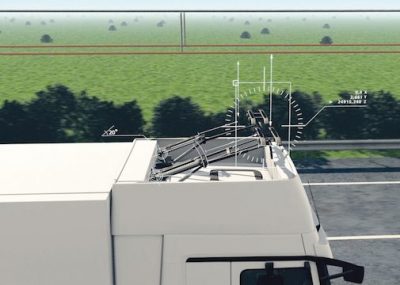 A specially-designed, moveable pantograph enables an automatic connection between the systems overhead contact line and the vehicle at speeds of up to 90 km/h. PHOTO: Siemens/Scania CV AB

Contracted by the SFA and installed northwest of Stockholm, the overhead wire system functions similarly to the catenaries that power electric rail lines around the world. Unlike trains that remain on the electrified lines along their entire route, the eHighway is designed to allow trucks to seamlessly connect and disconnect from the wires while traveling at speeds of up to 90 km per hour.

Siemens says the design will cut energy consumption in half compared to conventional internal combustion engines.

While the German conglomerate designed the overhead electrical system, Sweden’s Scania manufactured and adapted a pair of heavy duty trucks for use in the demonstration project. The eHighway vehicles run using diesel hybrid drive, allowing them to operate like typical fuel-burning vehicles in areas that aren’t electrified, or on grid power while connected to the catenary system. Maintaining the adaptability of conventional trucks, the design would allow for a staged roll-out of the technology—a common issue when implementing next generation technologies.

Running for two years, the pilot will determine if the system can be commercialized and deployed more broadly. It’s the first project of its kind to run in real-world conditions on a public road.

While Sweden has committed to transforming its transportation system to run fossil fuel-free by 2030, the technology could also be applied in other areas. Siemens noted it is also currently developing another eHighway pilot project that will roll out in California in 2017.