After being grounded in Hawaii for approximately nine months, Solar Impulse 2 is prepared to take on next leg of journey 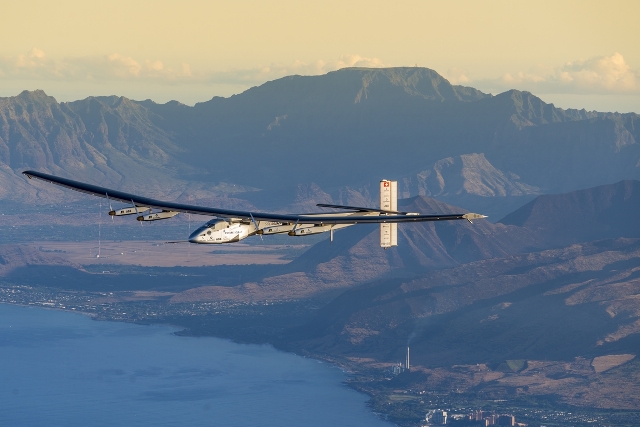 Solar Impulse 2 over Hawaii during a maintenance flight. Following repairs, the solar-plane is ready to resume its attempt to fly around the world. PHOTO: Solar Impulse

KALAELOA, Hawaii—A team of privately-funded aviation experimenters is ready to return to the skies following a lengthy lay-over in the Hawaiian Islands.

Solar Impulse, a Switzerland-based research company led by Bertrand Piccard and André Borschberg, has announced its solar-powered flyer has been repaired, and is clear to take off on the next leg of its around-the-world journey.

Solar Impulse 2 (Si2), the first solar plane capable of flying 24-hours-a-day without resorting to fuel, has spent the last nine months or so grounded in Hawaii following a five-day flight from Japan that ended July 3. The solar-powered plane sustained significant battery damage during the 8,900-kilometre trip, and the crew was forced to put its around-the-world ambitions on hold while working to replace the plane’s overheated batteries.

“As we experienced many times with Solar Impulse, obstacles often turn out to be opportunities for improvement,” Borschberg, the company’s CEO and co-founder, said. “Ultimately, this time was used to recreate the strong mindset within the team to continue our adventure. It takes sometimes more time to build up the right spirit then to develop new technologies.”

To ready the damaged plane for the next stage of its trip—from Hawaii to North America—Solar Impulse has performed a number of retrofits and tests. After replacing the damaged batteries, the research team launched 13 short-duration maintenance flights beginning in February, confirming the aircraft is performing properly. The crew also installed a new integrated cooling system to safeguard the batteries against any further temperature-related mishaps. Pilots Borschberg and Piccard then separately took off on a number of high-altitude training flights.

With the preparation complete, Si2 will await the “first favorable window” before leaving Hawaii and the Pacific’s temperamental weather behind.

As it watches the forecast, the team is also weighing its next destination in North America. The solar-powered plane is slated to touch down in either Phoenix, San Francisco, Los Angeles or Vancouver next—depending on what route wins out. The crew will then direct the aircraft to the eastern U.S., Europe, and back to Abu Dhabi in the United Arab Emirates, where the journey began.