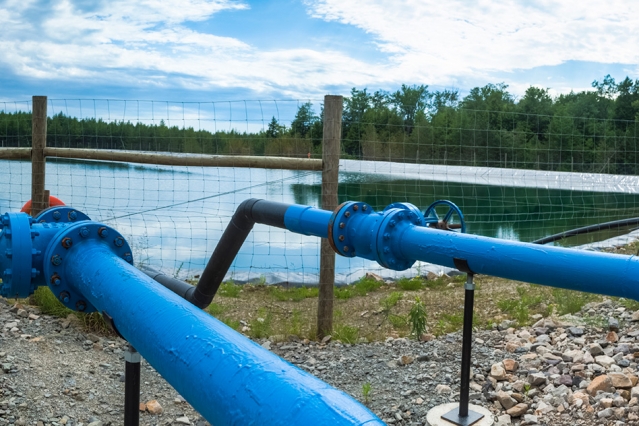 A holding pond for fracking water. Researchers say one application of “shock electrodialysis” will be to clean water contaminated in the oil and gas extraction process. PHOTO: MIT

CAMBRIDGE—Removing salt from water is nothing new. With more than two-thirds of the Earth covered in saline water, it’s no surprise the technology has existed in various forms for centuries. With rapid population growth, however, the need to process clean, potable water with a minimal amount of energy has become urgent.

Today, most of the world’s large-scale desalination uses reverse osmosis, a process which uses filters to separate water from waste products. Other methods include boiling, which is highly energy intensive. A team of researchers at the Massachusetts Institute of Technology, however, has developed a new method of removing salt from water that does not rely on filters that can become clogged, and uses less energy than boiling.

The researchers’ approach is “a fundamentally new and different separation system,” Martin Bazant, a chemical engineering and mathematics professor working on the project said in a paper outlining the method. 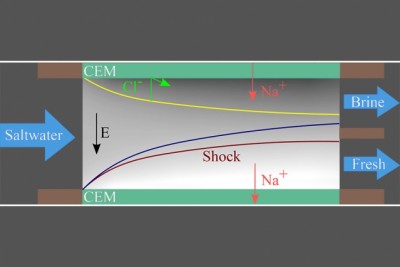 A diagram showing the process in which the shockwave pushes salt ions to one side of the vessel, leaving fresh water on the other. PHOTO: MIT

Dubbed “shock electrodialysis,” the process allows water to flow through a porous material called a frit that has membranes, or electrodes, closing off the system on each side. As water flows through the system, it’s hit with an electrically-driven shockwave. The current passes through the water, dividing it into two regions—one with salty water and the other with without. The separated streams then pass through a simple physical barrier at the end of the system, dividing it into two separate flows.

“It generates a very strong gradient,” Bazant said in a statement.

Though the technology would not initially be cost-competitive with reverse osmosis for large-scale seawater desalination, it does have several significant benefits over the traditional method. While the system does use a porous membrane, the water flows over the membrane and not through it, meaning it is not subject to the same buildup of filtered material known as fouling.

Another benefit of shock electrodialysis is the small amount of infrastructure required to run the system. Researchers think the technology could be valuable as a portable system for use in remote locations or in emergency response scenarios. Another possible applications they pointed to was the process’s potential use in cleaning the large amounts of wastewater generated by hydraulic fracturing, or fracking. Sven Schlumpberger, a graduate student working on the project, noted the system not only removes salt, but also a variety of other contaminants, something that could potentially sterilize the stream and clean fracking wastewater.

“The electric fields are pretty high, so we may be able to kill the bacteria,” Schlumpberger said.

The team of MIT researchers have demonstrated the process in the lab, and will now pursue scaling up the system so it can go through practical testing.