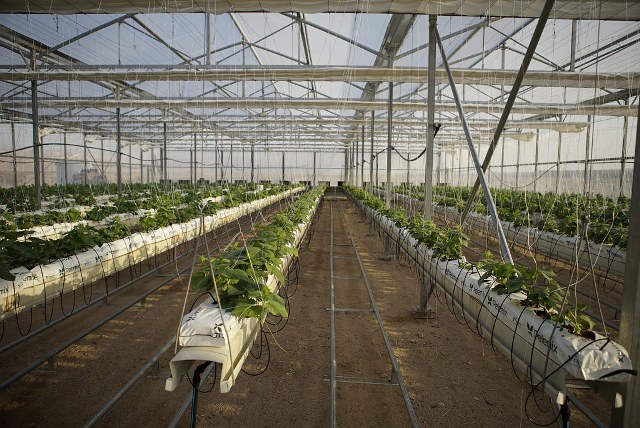 The project combines saltwater cooling and solar-powered desalination. The site can produce 130 tons of vegetables per year and 10,000 litres of fresh water every day. PHOTO: Sahara Forest Project

AQABA, Jordan—Water-poor Jordan has launched a project that uses seawater coupled with clean energy to produce crops in an arid desert not far from the Red Sea.

Jordan’s King Abdullah II and Crown Prince Haakon of Norway, which contributed most of the $3.7 million cost, inaugurated the facility in the kingdom’s port city of Aqaba this week.

Haakon told reporters he was “impressed by the way innovative ideas have been translated into a plant the size of four football fields.”

The facility, part of the Sahara Forest Project (SFP), produces “energy, fresh water and food and all this in an arid desert,” he said.

The facility, surrounded by rocky desert, uses seawater to cool greenhouses. A solar-powered plant then desalinates the water for irrigation.

Inside the greenhouses, pesticide-free cucumbers flourish.

The project is set to produce 130 tons of vegetables a year and 10,000 litres of fresh water a day.

“This is just the start,” said Joakim Hauge, head of SFP. He said the organization selected Jordan because it has the required abundance of sunlight and seawater. Ultimately, the group is aiming to ensure the arid Sahara region makes the most of its deserts by taking advantage of new technologies, while working to reverse the desertification trend.

Last month, a report by Stanford University suggested that Jordan, one of the world’s driest countries, could face more severe droughts unless new technologies are applied in farming and other sectors.

“Future adaptation to extreme droughts in Jordan will be an immense challenge,” said the report by the university’s School of Earth Science. “The projected negative impacts of more severe droughts of greater duration calls for essential alternatives.”