Sources have told The Canadian Press that defence officials now don't expect the first of 88 new fighters to be delivered for another eight years, but none would speculate on why the delivery schedule was being changed 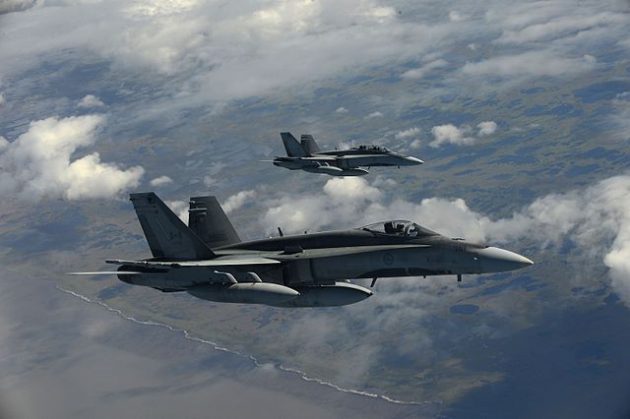 OTTAWA—The Royal Canadian Air Force may have to keep its aging CF-18s airborne even longer than already expected after industry sources warned that the Trudeau government is planning to push back the delivery date for its new fleet of fighters.

Word of the likely delay comes with the government moving ahead with the purchase of used fighter jets from Australia as a temporary stopgap alongside its existing CF-18s, rather than the original plan of buying brand new Super Hornets from U.S. aerospace giant Boeing Co.

But the government is also wrestling with how best to sell Canadians on the idea of used jets, mindful of the disaster that followed the purchase of second-hand British submarines in the 1990s.

The Liberal government said last year that it planned to start receiving new fighter jets in about five years, or around 2021, at which point the phase-out of CF-18s was scheduled to begin.

But several sources told The Canadian Press on that defence officials now don’t expect the first of 88 new fighters to be delivered for another eight years, putting the new time frame around 2026.

The sources, speaking on condition of anonymity because of the sensitivity of the issue, would not speculate on why the delivery schedule was being changed.

But the decision could have major financial implications if it means having to sink even more money into the CF-18s to keep them in service longer than planned.

National Defence had already planned to spend up to $500 million to keep its 76 CF-18s flying to 2025, but previous estimates have said extending past that date would be very expensive.

Some are also wondering whether the Liberals, who promised to launch a formal fighter-jet competition to replace the CF-18s before the 2019 election, now plan to hold off until after Canadians go to the polls.

Retired military officers and defence experts alike say a competition, which latest estimates say would be worth up to $19 billion, could be launched right away, and urged the Liberals to take that step, rather than waiting several more years.

“If they had launched a competition last year, we could already be getting on with it,” said Alan Williams, who previously served as head of military procurement at the Department of National Defence.

“Even today, it could be started.”

Defence Minister Harjit Sajjan would not comment Wednesday on when the competition would be launched, saying only that it would be announced “at the appropriate time.”

In the meantime, government and industry sources say the Liberals have settled on buying Australia’s used jets from Australia. The original plan to buy 18 Super Hornets, at an estimated cost of $6 billion, was scuttled after Boeing triggered a bitter trade dispute with Montreal-based rival Bombardier earlier this year.

The Australian plan does have its advantages. The aircraft will almost certainly be cheaper than the Super Hornets, and easier to incorporate into Canada’s existing fleet, since they are nearly identical to the CF-18, and won’t require new training or infrastructure.

But the Australian jets are 30 years old—the same vintage as the CF-18s—and sources say the government is concerned about resurrecting memories of the four second-hand subs Canada bought from the U.K. One of those vessels, HMCS Chicoutimi, caught fire while crossing the Atlantic in 2004, killing a naval officer and injuring nine other sailors.

Billions of dollars have also been sunk into the vessels over the years to address a multitude of technical problems, which has kept them docked more often than they have been at sea.

During question period Wednesday, Conservative MP Tony Clement called on the Liberals to abandon the “rusted out” Australian “bucket of bolts” and hold an immediate competition to replace the CF-18s.

The Australian planes come with another built-in advantage, said defence analyst David Perry of the Canadian Global Affairs Institute: Canada has long since learned how to keep them in service.

“We’ve proven to be very good, out of necessity, at keeping them flying for quite some period of time, whereas the Upholder class of submarines were totally unique. Canada hadn’t operated them,” Perry said.