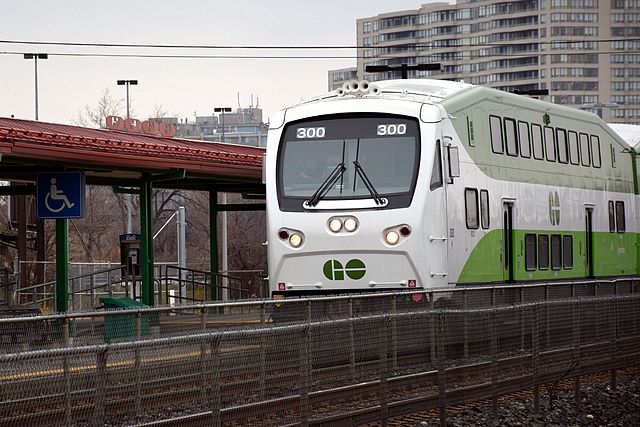 An initial study determined the project was “technically feasible,” spurring a more in-depth look at the new technology. PHOTO: Secondarywaltz/Wikimedia

TORONTO—An Ontario government project that would liberate electrified trains from overhead power lines is moving to the next phase.

After months of study, an assessment commissioned by provincial transit agency Metrolinx has determined hydrogen-powered trains are a “technically feasible” alternative to conventional electric trains that draw their power from overhead wires.

The study stops short of endorsing the emerging technology, but says the lifetime costs of building a hydrail system would be equivalent to electrifying the Toronto area’s GO Transit network using electric locomotives and catenaries. The province has already committed to eliminating its fleet of diesel locomotives currently in operation in and around the city as part of a $21.3 billion project to transform the GO network from a commuter rail service into a more functional regional network.

Relying on hydrogen-powered trains would allow the province to go electric without building costly electrical infrastructure across hundreds of miles of track.

With the positive results of the initial feasibility study in-hand, the province is moving to the next stage of the process.

It says it has begun consulting with European rail manufacturers Alstom and Siemens.

Both train makers are working on hydrogen rail technology—with Alstom moving toward production of its new Coradia iLint and Siemens beginning to piece together a hydrogen-powered unit that will hit the rails early next decade. Notably, both trains use Canadian fuel cells made by Hydrogenics Corp and Ballard Power Systems Inc., respectively.

Ontario has issued a request for proposals for designs of a hydrogen-powered locomotive similar to the diesel locomotives currently in use in Toronto, which could lead to a prototype fuel cell locomotive operating in the province. Meanwhile, Metrolinx will also look at bi-level electrical multiple units (EMU)—self-propelling carriages that don’t require locomotives—as part of its closer assessment of how hydrail could be introduced in the province.

Though the study and decision to move forward with further analysis is a positive step for hydrogen rail, the novel electrification technology faces significant challenges.

First among them is hydrogen rail’s minute track record. The first fuel cell train took its inaugural run just last year. The technology has not yet been deployed on a commercial scale, let alone on a system as large as Ontario’s GO Transit network.

Regulatory hurdles, unexpected operational reliability issues and delays to the province’s planned 2025 electrification timeline are among the many others issues the province’s feasibility study identifies.