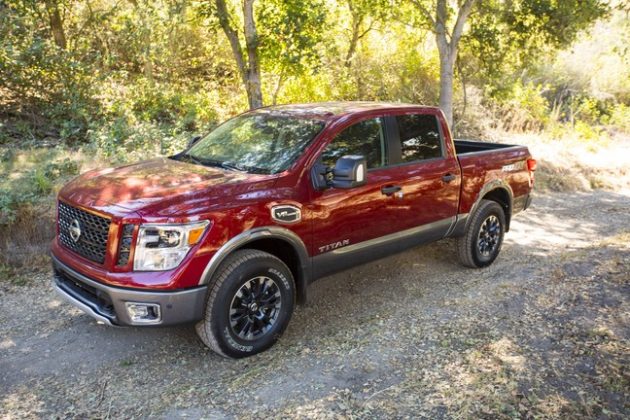 The 2017 Nissan Titan is fitted with a camera that shows rear, side views and above-the-truck views to help parking and off-road manoeuvrs. PHOTO: Nissan

The new Titan offers several new features, including an indispensable all-around camera and side blind spot monitoring. But it can still tow up to 9,390 pounds and haul up to 1,610.

For the first time in its 12-year history, the Titan will be available in more than the one body configuration. Later this year, a less expensive single cab Titan with one row of seats will join the two-row Crew Cab Titan.

The Nissan’s fuel economy still lags. The 2017 Titan, with 390-horsepower Endurance V-8 as its sole engine, is rated at 15 mpg in city driving and 21 mpg on highways by the federal government. The mileage leader for full-size pickups, the 2016 F-15 with turbocharged V6, meanwhile, gets 19/26 mpg ratings.

The starting manufacturer’s suggested retail price, including delivery charge, for a base, rear-wheel drive, 2017 Titan S Crew Cab model with 5.5-foot-long bed is $35,975.

Note that the F-150 and Silverado are available at lower prices with regular cabs that have one row of seats.

The 2017 model year brings the most changes ever to Nissan’s Titan as it tries to lure customers.

The 5.6-litre, double overhead cam V8 now is direct injected and delivers 73 more horsepower than the V8 that was in the previous regular-duty Titan, which was the 2015 model.

There’s more torque, too, peaking at 394 foot-pounds at 4,000 rpm, and the revamped engine is mated to a new seven-speed automatic transmission that delivered the power smoothly in the test-driven Titan.

The power wasn’t instantaneous, but it came on purposefully and strongly. Throttle response felt better than in earlier Titans, and the test-driven truck slowed and adjusted to driver demands on the accelerator better than expected.

A tow mode allows drivers to set and hold gears for towing needs. The brakes in the tested truck were strong and the brake pedal felt firm.

The ride was bouncy, but the Titan’s interior, surrounded by more insulation and with thicker window glass, was quieter than expected. There are new, soft-touch materials on the dashboard, and seats are designed for long-distance comfort.

The test-driven model, a top-of-the-line Platinum Reserve Titan, had attractive, leather-swathed seats with a unique small-square design not typically found in pickups. The centre console between the front seats wasn’t quite as wide as in the Ram pickups, but it can store small laptops and lots of other stuff.

The silver-rimmed gauges in the instrument panel were easy to read and included a centre display that clicked through menus such as fuel economy and vehicle warnings.

The test-driven model’s ground clearance was 10.1 inches, but fixed running boards are standard and help passengers enter and exit the vehicle.

The Crew Cab Titan’s back seat legroom of 38.5 inches felt comfortable for more passengers, though the F-150 Super Crew has more than 43 inches.

Nice touches in the Titan included a tailgate that went down softly, a pull-down step to help entry into the pickup bed, adjustable tie-downs in the bed and a camera that not only showed rear views but side and above-the-truck views to help parking and off-road manoeuvrs.

But the 2017 Titan’s 7-inch display screen atop the dashboard is smaller than some others’ and got washed out by sunlight at times.

There’s also no connectivity yet for Apple CarPlay and Android Auto.