CIBC analyst says newly-built projects in Western Canada are profitable with crude prices at US$50, while new technology at early stages of development will cut emissions 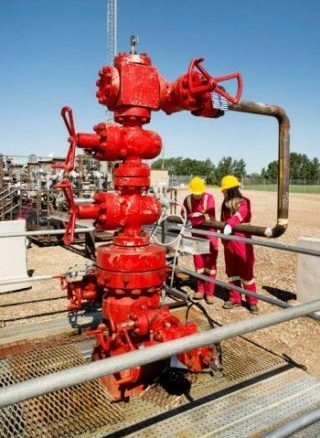 CALGARY—A CIBC research report predicts that new technologies will greatly reduce the cost and environmental impact of building new oilsands projects over the next five years.

Oilsands analyst Arthur Grayfer says in the report that newly constructed projects producing bitumen through wells will likely be profitable at today’s benchmark oil prices of about US$50 per barrel. That’s $15 less than projects using current technology.

He says construction costs are falling thanks to smaller central processing facilities, smaller well pads and greater use of centralized automation.

Meanwhile, the use of solvents injected into the wells to dilute the bitumen in place of massive amounts of steam will not only reduce operating costs but will greatly reduce carbon emission intensity.

CIBC says solvent technologies being demonstrated at pilot projects now could allow companies to cut their emissions by about 35 per cent.

Other technologies at earlier stages of development could cut emissions by 70 to 80 per cent, the report says, a prospect that could greatly increase the amount of oilsands produced before the industry is stopped by the Alberta government’s hard emission cap of 100 megatonnes per year of CO2.

“Our analysis suggests that in the next five years, greenfield oilsands development will be able to earn a 15 per cent rate of return in a US$50 per barrel oil world,” the report notes.

“Under the current technology, Alberta’s emission cap of 100 megatonnes of CO2 would be reached in the second half of the next decade, but our analysis suggests there is the potential for this to be pushed out much further in time,” it adds.