Canadian rare earth miner plans to use seven Zeppelin-like airships to shuttle supplies, personnel to isolated mine and return with ore 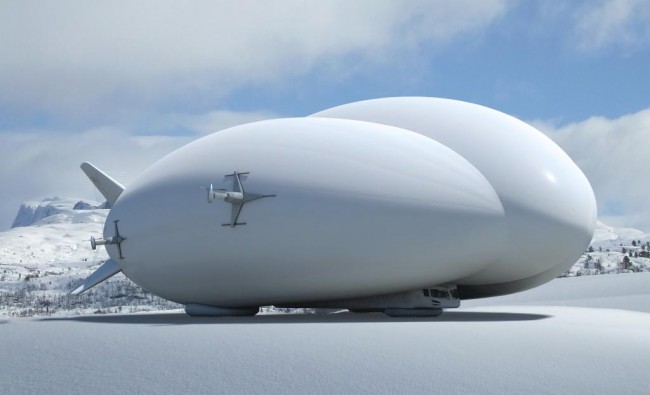 The Hybrid Airship has the ability to land on virtually any surface, including snow, sand, dirt and even water. PHOTO: Lockheed Martin

MONTREAL—An upstart Canadian mining company has signed a deal that could help revive a long-dormant technology and launch a half-dozen unfamiliar objects into the quiet skies over remote northern Quebec.

In Ottawa Nov. 16, Quest Rare Minerals Ltd. and U.K.-based Straightline Aviation penned a memorandum of understanding designed to provide the Montreal-headquartered company with logistical support at its unbuilt Strange Lake mine complex.

Unlike most supply and personnel shuttling services, however, the agreement covers the use of seven Lockheed Martin Hybrid Airships that will carry workers and supplies to the mine before returning chock-full of ore.

The LM-1—a Zeppelin-like airship designed to carry heavy loads using stores of helium and four engines for lift—has been under development for years and has been touted as a cost-effective, environmental transportation solution for remote areas.

Related: Take an in-depth look at Lockheed Martin’s Hybrid AirshipAt the MoU signing, Charles Bouchard, CEO of Lockheed Martin Canada said the new airship is being sought after to solve a range of infrastructure challenges in isolated areas across Canada’s North.
Advertisment

“It is an ideal country to use the highly innovative Hybrid Airship,” Bouchard said.

Nearly 70 per cent of Canada’s landmass is inaccessible by road or rail lines, and airship technology could replace expensive conventional supply flights to both mine sites and isolated communities, experts say.

Rob Binns, CEO of Hybrid Enterprises, a company serving as the exclusive seller of the U.S. aerospace company’s airship, added that the heavier-than-air flyer will bring significant benefits to the Strange Lake project.

“Removing the need for expensive, intrusive infrastructure, it is a significant step in re-defining the way transport works in remote regions,” he said.

Both the U.S. Federal Aviation Administration and Transport Canada have agreed to a framework to certify the airship technology and Lockheed Martin has scheduled the first deliveries for 2019. Straightline agreed to buy 12 of the airships in a letter of intent worth $480 million earlier this year.

The Quest-Straightline deal is worth approximately US$850 million over a 10-year period starting in 2019. With the rare earth miner still working on developing the mine site, however, the agreement is contingent on a number of factors.

If the project moves forward, the airships will shuttle more than 200,000 tonnes of rare earth ore concentrate between the Strange Lake complex near the Labrador border and Schefferville, Que., which is linked by rail to the port in Sept-Iles in eastern Quebec.