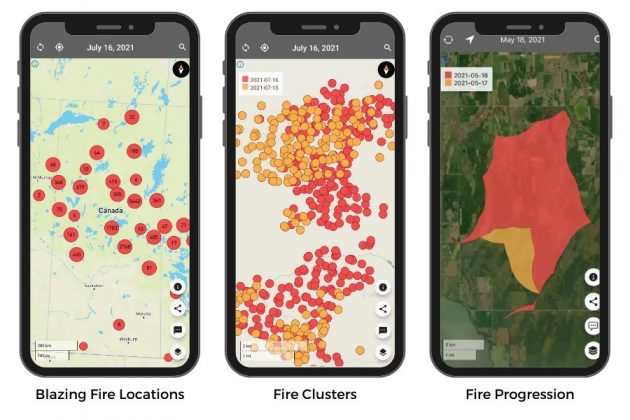 TORONTO — The new FireFringe app detects and maps forest fires and hotspots across the country. It is now available for free to Canadian firefighters, forestry managers, emergency managers, municipalities, the media and the public to see in near real-time where fires are blazing.

“There are thousands of fires raging right now in Canada, causing devastation,” said Phil Green, CEO of First Resource Management Group (FRMG), the developers of FireFringe, in a statement. “Our app can help save communities. It shows where fires are beginning to grow and can help predict where they are headed. It’s simple and visual to keep people informed and safe.”

FireFringe leverages FRMG’s SkyForest technology, which uses satellites to make detailed maps of forests and the trees growing there. It is then paired with satellite sensors from NASA that detect high temperatures, and mapping imagery from Mapbox. The app also provides data from Natural Resources Canada about the perimeters of fires and their hotspots.

On the maps, fire clusters appear as large circles and show the number of fire points in a cluster. As you zoom in, current day fires appear in red. Previous days’ appear in yellow.

“I’ve been fighting fires all my life,” said Greg Johnson, CEO, Johnson Fire Service. “We’re currently battling one of the worst seasons ever and FireFringe gives us a leg up so we can keep people and property safe.”