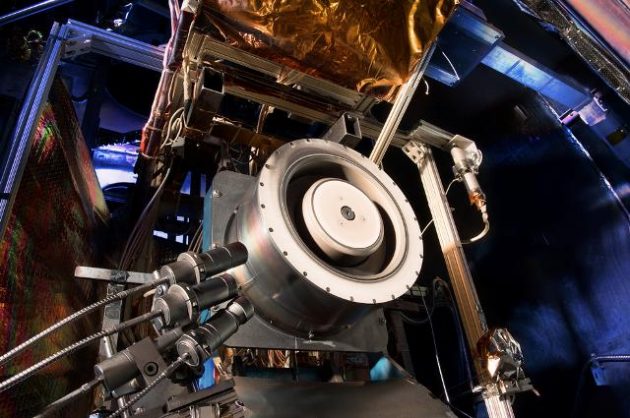 HAMPTON, Va.—NASA has conducted the second to last splashdown test for its Orion spacecraft as the agency prepares to eventually send humans to Mars.

Scientists at NASA’s Langley facility used a pendulum and explosives to vault a test capsule into a pool of water at about 25 mph. The 11-foot craft disappeared behind a bowl-shaped splash before bouncing buoyantly against safety netting.

The last time a NASA spacecraft parachuted into the ocean with astronauts on board was in the 1970s during the Apollo missions. The rules of physics haven’t changed, but the technology has grown dramatically, NASA officials said.

The capsule’s heat shield is no longer steel but carbon fiber and titanium, making it stronger and lighter. Instead of a couch-like seat to hold all of the astronauts, each will have his and her own custom-made chair to better protect the spine.

Computer simulations have shrunk the number of actual splashdown tests from 100 to 10.

“A capsule hitting the water hasn’t changed,” said Mark Baldwin, an analyst with Lockheed Martin, the prime contractor behind Orion. “But what we know about it has.”

During Thursday’s test, more than 500 instruments gauged aspects of the impact, including the level of strain on heatshield and the aluminum cabin. Crash test dummies were also inside to measure safety designs. The speed of the craft simulated the failure of one of its three parachutes.

Splashdowns are back because they require fewer instruments than touching down on land, and more space can be dedicated to supplies and other equipment, said Ronny Baccus, Orion’s structure system manager.

Orion is meant to expand human exploration in space, principally Mars. It will blast off atop a megarocket still under development by NASA called SLS for Space Launch System.

Orion sailed through its first unmanned test flight in 2014, splashing down in the Pacific Ocean. Another unmanned launch is scheduled for 2018. The agency hopes Orion will carry astronauts into space by 2023.