The U.S. VP laid out measures he believes Beijing is employing to undermine the Trump administration

October 5, 2018  by Deb Riechmann And Zeke Miller, The Associated Press 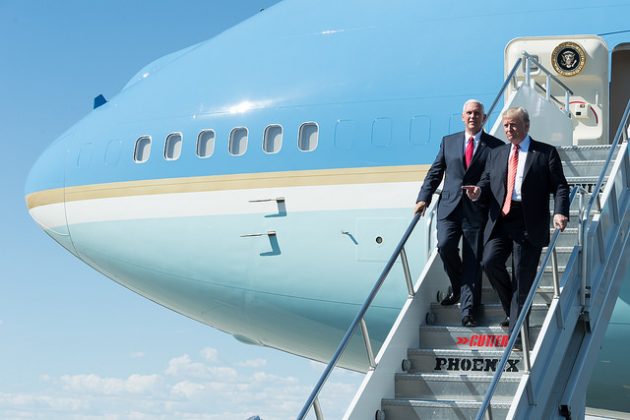 WASHINGTON—Vice-President Mike Pence charged Thursday that Russia’s influence operations in America pale in comparison with the covert and overt activities China is taking to interfere in the U.S. midterm elections and counter President Donald Trump’s tough trade policies against Beijing.

Pence laid out measures Beijing is employing to undermine the Trump administration. They include public steps such as targeting Chinese tariffs to industries in states that are crucial to Trump in the midterms as well as behind-the-scenes actions like coercing U.S. businesses to speak out against the Trump administration and intimidating scholars.

Pence also denounced China’s manoeuvrs in the South China Sea, its oppression of Christians, Muslims and other religious believers, and Chinese President Xi Jinping’s signature infrastructure and foreign policy initiative. The unusually expansive and aggressive criticism of Beijing by a senior U.S. official indicated that Washington could be preparing to take a more confrontational approach with China on issues beyond just the trade dispute.

“This is nothing but speaking on hearsay evidence, confusing right and wrong and creating something out of thin air,” Hua said in a strongly worded statement issued early Friday in Beijing.

“We have no interest in meddling in U.S. internal affairs and elections,” Hua said.

“Beijing has mobilized covert actors, front groups and propaganda outlets to shift Americans’ perception of Chinese policies,” he said. “As a senior career member of our intelligence community recently told me just this week, what the Russians are doing pales in comparison to what China is doing across this country and the American people deserve to know.”

Pence said China has responded to Trump’s tough trade policies against Beijing with tariffs of its own designed to inflict maximum political damage.

“By one estimate, more than 80 per cent of U.S. counties targeted by China voted for President Trump and I (sic) in 2016,” Pence said during a speech delivered at the Hudson Institute, a conservative think-tank . “Now, China wants to turn these voters against our administration.”

He also noted a multi-page advertising supplement that was inserted last week in the Des Moines Register in Iowa, the home state of the U.S. ambassador to China and a pivotal state in this year’s elections and the 2020 presidential election. “The supplement, designed to look like news articles, cast our trade policies as reckless and harmful to Iowans.”

Pence’s speech served as a follow-up of sorts to Trump’s charge before the U.N. Security Council last month that China was meddling in U.S. elections to help Democrats.

After Trump’s remark, intelligence and homeland security experts said they didn’t know of any Chinese influence operations akin to Russian activities during the 2016 presidential election.

Analysts with the Eurasia Group consultancy noted that the charges of Chinese meddling are largely unsubstantiated and could allow Trump to distract from the special counsel’s investigation into Russian interference. They also said it was the first time a senior U.S. official had delivered such a “broadside” against China on an array of issues.

“The more open tone of confrontation from Pence will strengthen the perception in China that the ultimate U.S. objective in the (trade) dispute is to contain China’s rise,” the group’s analysts led by Asia director, Michael Hirson, wrote.

The Trump administration also asserted Thursday that Chinese “economic aggression” has helped undermine the global competitiveness of defence-oriented U.S. industries. In a lengthy report released Thursday evening, the administration asserted that China “represents a significant and growing risk to the supply of materials and technologies deemed strategic and critical to U.S. national security.” It said these include specialized alloys and rare earth metals.

The report, which resulted from a Trump directive in July 2017 to assess the health of industries whose products and services are important to national defence, also accused China of “systematic theft” of U.S. weapons systems and the illicit transfer of dual-use technology that has upset the military balance between the U.S. and China.

In his speech, Pence offered only two examples related to the upcoming elections—the targeted tariffs and the advertising supplement—which did not rise to the level of the Russian effort to meddle in the 2016 election. But he pointed to a document Beijing circulated in June titled “Propaganda and Censorship Notice,” which laid out a broader influence campaign, similar to Russia’s ongoing disinformation campaign against the U.S.

The document stated that China must “strike accurately and carefully, splitting apart different domestic groups” in the United States, the vice-president said.

Pence also said more U.S. companies should think twice before entering the Chinese market if it means turning over their intellectual property.

He urged Google to “immediately end development of the ‘Dragonfly’ app that will strengthen Communist Party censorship and compromise the privacy of Chinese customers.” Google employees and others have protested the company’s plan to build a search engine that would comply with Chinese censorship.

Pence said other examples of “proactive and coercive” ways that China is meddling in the U.S include:

National security adviser John Bolton said much of what the U.S. knows about Chinese activities in the United States remains classified.

He said if more were declassified, it would help Americans better understand the scope of the Chinese actions to affect the election and its “broader effort to influence political opinion in this country through academic institutions, through think tanks, through intimidation of scholars.”