The businessman, an avid sports fan, owned the Portland Trail Blazers and Seattle Seahawks, and donated more than US$2 billion to a wide range of interests 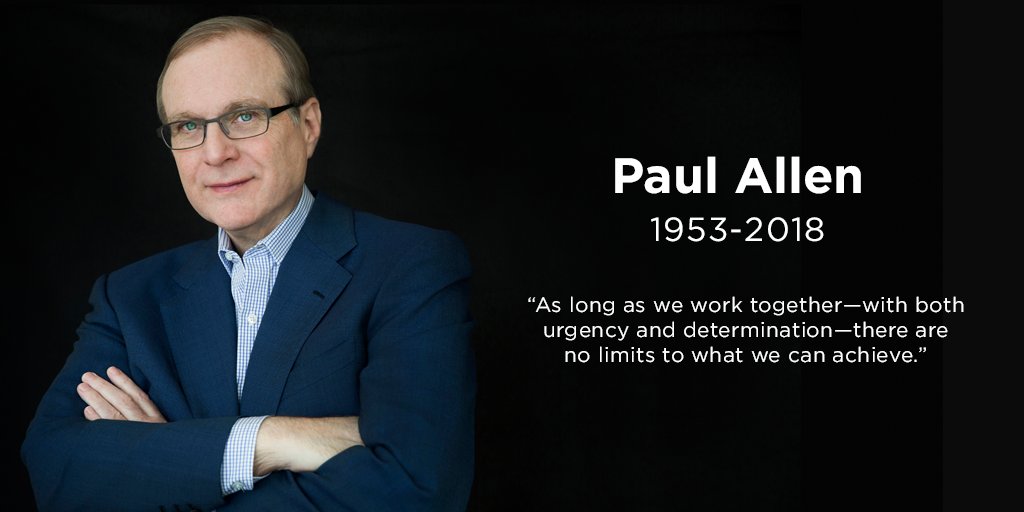 Allen used the fortune he made from Microsoft _ whose Windows operating system is found on most of the world’s desktop computers _ to invest in other ambitions, from tackling climate change and advancing brain research to finding innovative solutions to solve some of the world’s biggest challenges.

“If it has the potential to do good, then we should do it,” Gates quoted his friend as saying.

Allen died Monday in Seattle from complications of non-Hodgkin’s lymphoma, according to his company Vulcan Inc. He was 65. Just two weeks ago, Allen, who owned the NFL’s Seattle Seahawks and the NBA’s Portland Trail Blazers, had announced that the same cancer he had in 2009 had returned.

Gates, who met Allen at a private school in Seattle, said he was heartbroken to have lost one of his “oldest and dearest friends.”

“Personal computing would not have existed without him,” Gates said in a statement, adding that Allen’s “second act” as a philanthropist was “focused on improving people’s lives and strengthening communities in Seattle and around the world.”

Over his lifetime, Allen gave more than $2 billion to efforts aimed at improving education, science, technology, conservation and communities.

“Those fortunate to achieve great wealth should put it to work for the good of humanity,” Allen wrote several years ago, when he announced that he was giving the bulk of his fortune to charity. He said that pledge “reminds us all that our net worth is ultimately defined not by dollars but rather by how well we serve others.”

Allen, who played guitar, built a gleaming pop culture museum in his hometown to showcase his love of rock n’ roll, and funded underwater expeditions that made important shipwreck discoveries, including a U.S. aircraft carrier lost during World War II.

Yet in a sense, Allen also lived up to the moniker once bestowed on him by Wired Magazine: “The Accidental Zillionaire .” He was a programmer who coined Microsoft’s name and made important contributions to its early success, yet was overshadowed by his partner’s acerbic intellect and cutthroat business sense.

At the company’s founding, for instance, Allen let Gates talk him into taking the short end of a 60-40 ownership split. A few years later, he settled for an even smaller share, 36 per cent, at Gates’ insistence. Reflecting on that moment In his memoir, Allen concluded that he might have haggled more, but realized that “my heart wasn’t in it. So I agreed.”

Allen was born in Seattle. After graduating from the city’s private Lakeside School, where he met Gates, Allen spent two years at Washington State University. The two friends both dropped out of college to pursue the future they envisioned: A world with a computer in every home.

“There would be no Microsoft as we know it without Paul Allen,” said longtime technology analyst Rob Enderle, who also consulted for Allen.

Allen and Gates founded Microsoft in Albuquerque, New Mexico, and their first product was a computer language for the Altair hobby-kit personal computer, giving hobbyists a basic way to program and operate the machine.

After Gates and Allen found some success selling their programming language, MS-Basic, the Seattle natives moved their business in 1979 to Bellevue, Washington, not far from its eventual home in Redmond.

Microsoft’s big break came in 1980, when IBM Corp. decided to move into personal computers and asked Microsoft to provide the operating system.

Gates and Allen agreed, even though they didn’t have one to offer. To meet IBM’s needs, they spent $50,000 to buy an operating system called QDOS from another startup in Seattle _ without, of course, letting on that they had IBM lined up as a customer. Eventually, the product refined by Microsoft became the core of IBM PCs and their clones, catapulting Microsoft into its dominant position in the PC industry.

Allen served as Microsoft’s executive vice-president of research and new product development until 1983, when he resigned after being diagnosed with Hodgkin’s disease.

But Allen left Microsoft knowing he and Gates would be forever linked in the history of technology.

“We were extraordinary partners,” Allen wrote. “Despite our differences, few co-founders had shared such a unified vision _ maybe Hewlett and Packard and Google’s Sergey Brin and Larry Page, but it was a short list.”

After leaving Microsoft, Allen would remain interested in technology, especially the field of artificial intelligence, which recalled first piquing his interest while he was still a teenager after reading “I, Robot,” a science fiction book by Isaac Asimov.

“From my youth, I’d never stopped thinking in the future tense,” Allen wrote in his 2011 memoir, “Idea Man.”

With his sister Jody Allen in 1986, Allen founded Vulcan, which oversees his business and philanthropic efforts. He founded the Allen Institute for Brain Science and the aerospace firm Stratolaunch, which has built a colossal airplane designed to launch satellites into orbit. He has also backed research into nuclear-fusion power and scores of technology startups.

The SpaceShipOne technology was licensed by Sir Richard Branson for Virgin Galactic, which is testing a successor design to carry tourists on brief hops into lower regions of space.

Yet Allen never came close to replicating Microsoft’s success. What he always seemed to lack, Enderle said, was another Bill Gates to help fulfil his visions.

“He was a decent engineer who got the timing on an idea right once in his life, and it was a big one,” Enderle said.

When Allen released his memoir, he allowed “60 Minutes” inside his home on Lake Washington, across the water from Seattle, revealing collections that ranged from the guitar Jimi Hendrix played at Woodstock to vintage war planes and a 300-foot yacht with its own submarine.

“My brother was a remarkable individual on every level,” his sister Jody Allen said in a statement. “Paul’s family and friends were blessed to experience his wit, warmth, his generosity and deep concern,” she added.

Paul Allen’s influence is firmly imprinted on the cultural landscape of Seattle and the Pacific Northwest, from the bright metallic Museum of Pop Culture designed by architect Frank Gehry to the computer science centre at the University of Washington that bears his name.

In 1988 at 35, he bought the Portland Trail Blazers professional basketball team. He told The Associated Press that “for a true fan of the game, this is a dream come true.”

He also was a part owner of the Seattle Sounders FC, a major league soccer team, and bought the Seattle Seahawks. Allen could sometimes be seen at games or chatting in the locker room with players.